He Arrived At Dusk 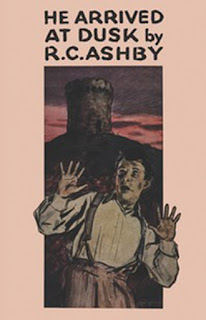 From the moment William Mertoun arrives to catalogue the library at Colonel Barr's old mansion on the desolate Northumbrian moors, he senses something is terribly wrong. Barr's brother Ian has just died, mysteriously and violently, and the Colonel himself is hidden away in a locked room, to which his sinister nurse denies all access. As strange and supernatural events begin to unfold, Mertoun learns the local legend of a ghostly Roman centurion, slain on the site sixteen centuries earlier, who is said to haunt the estate. Mertoun is sceptical at first, but after another murder, a harrowing seance, and an actual sighting of the spirit one lonely night on the moor, he realizes that he and everyone at Barr's mansion are in mortal danger. What does the ghost want, and can it be stopped?

William Mertoun is summoned to the wilds of Northumberland by the reclusive Colonel Barr to provide a valuation of the estate but once there he is drawn into the mystery of the family and their travails at the spectral hands of a ghostly Roman centurion.

Ashby's novel originally published in 1933 is a darkly immersive page turner that takes its rather daft premise and turns it into a neat and compelling narrative.  At its heart lie the menacing, desolate moors and coast of the Northumbrian landscape and an isolated mansion overlooked by the ancient monument from which it takes its name, 'The Broch'.

Ashby populates her novel with a cast of characters reflecting the highs and lows of society from our noble, if a little a little dim, auctioneer to a mad doctor via an American psychologist, a Marxist shepherd and a frivolous teen girl straight out of a P.G. Wodehouse novel who gets all the best lines.

I have to admit I struggled a little at the beginning of the book as I found the prospect of a ghostly Roman soldier a little, well, naff but once I began to pick up an inkling as to where Ashby was leading me and also once the quality of her prose had gotten it's teeth into me this became a joy to read from beginning-ish to end.


If you enjoy what we do here on Wyrd Britain and would like to help us continue then we would very much welcome a donation towards keeping the blog going - paypal.me/wyrdbritain

Affiliate links are provided for your convenience and to help mitigate running costs.
Posted by ian holloway at 16:01