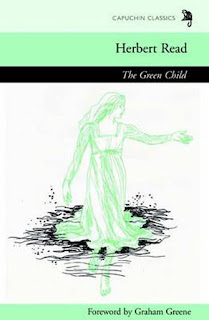 First published in 1935, The Green Child is Herbert Read's only novel. But if he had written nothing else, this one inspired book would insure his fame. It is a Utopian novel, a unique blend of reality and fantasy which moves from the English countryside to the South American pampas and then to a mysterious and eternal underground of caves.

Taking as its starting point the legend of the two green children of Woolpit this, the only novel by the English anarchist and poet Herbert Read is a strange and fascinating reflection on the search for meaning in life.

Presented in three parts each concluding with the seeming death of the narrator, Olivero, that allow us a glimpse of the demise of various aspects of his personality.

The opening part tells of Olivero's return to the English village of his birth and his discovery of the green child - now a grown woman - who had arrived in the village on the day of his departure.  Here we see the man who would become Olivero as a noble and somewhat impetuously passionate character following his impulses and leaping both to the defence of the woman and also into the unknown.

The second part, told in flashback, tells of his time travelling and of his life as the benevolent dictator of the South American country of Roncador.  Here his thoughtful nature allows him to design and govern a utopian society that he eventually abandons with the realisation that he has also caused its stagnation.

The third part is set within the subterranean world of the green child, another utopian society in stark contrast to the entirely agrarian, non-intellectual Roncador.  This literally stratified world melds work, leisure and conteplation and it is here he finds peace as all the competing aspects of his personality find fulfilment in their own time and in harmony with those around him.

Throughout the novel Read's political leanings are evident and this novel is as much an exloration of those beliefs and the worlds they could create as it is a fantasy of worlds beyond.  It's utopianism is readily apparent and explored in ways that make for interesting contrasting reads across the various parts of the book and has the cumulative effect of producing a thorougly and oddly engrossing novel.

Affiliate links are provided for your convenience and to help mitigate running costs.
Posted by ian holloway at 17:04