Guardian of the Past 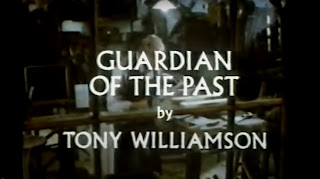 'Worlds Beyond' was an ITV series broadcast in the mid 80s that apparently sourced it's material from the archives of the Society for Psychical Research.  We've featured a couple of episodes before on Wyrd Britain - 'The Haunted Garden' & 'Home' - which were, in turn, a light and fluffy ghostly love story and a messy and confused haunted house tale.

This time out it's script by ITC spy-fi alumni Tony Williamson (The Avengers, Adam Adamant Lives!, Jason King, and others) keeps things a lot more vigorous.  The cast includes Paul Freeman (Raiders of the Lost Ark's Nazi archeologist 'René Belloq') and Mary Tamm (Doctor Who's first 'Romana') as an entitled middle class couple who stupidly steal a bone from a mummy's tomb as a souvenier of their Egyptian holiday and Terrence Alexander (Bergerac's 'Charlie Hungerford') as a sort of occult detective who just happens to be a member of that intrepid society of psychical researchers. 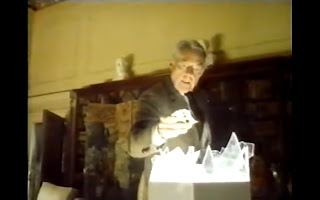 Williamson keeps things moving at a fairly breakneck pace and litters the 30 minute runtime with a car crash, two spinal injuries, a blinding, an attempted stabbing, hypnotic trances galore and a not entirely ineffective ghostly figure, well it's more effective than Tamm's American accent at least.

Personally, I like this one a lot,  it's good, cheap fun. It wears it's lack of budget well and goes all out with what it has and does it well with a cast who all appear fully committed. Storywise there's nothing here that devotees of ghostly fictions won't have seen before but as an adaptation of a 'real' haunting one has to suspect it's been given just enough of an authorial tweak by Williamson to give it a satisfying narrative arc.

Affiliate links are provided for your convenience and to help mitigate running costs.
Posted by ian holloway at 08:20

Email ThisBlogThis!Share to TwitterShare to FacebookShare to Pinterest
Labels: Guardian of the Past, TV Series, Worlds Beyond