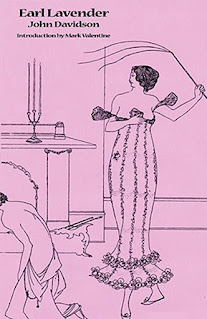 Following in the tradition of "Don Quixote," "Earl Lavender" is the story of two impecunious gentlemen who run away from their conventional lives, style themselves 'Earl Lavender' and 'Lord Brumm', and set out to preach the new creed of Evolution. Their hilarious romp across London leads them to all sorts of strange adventures, such as a wild hansom cab chase, a sojourn among a subterranean society of flagellants, and the discovery of the evolutionary 'Missing Link'.

'Earl Lavender' or 'A Full and True Account of the Wonderful Mission of Earl Lavender, which Lasted One Night and One Day; with a History of the Pursuit of Earl Lavender and Lord Brumm by Mrs. Scamler and Maud Emblem' to give it it's full title is the story of the man now named as 'Earl Lavender'. Declaring himself the fittest of all men he, along with his new acquaintance, 'Lord Brumm', sets out on a brand new lifestyle claiming evolution as their guiding force and allowing it to provide for them in all things as they rampage through the streets, restaurants and secret societies of London pursued by two ladies and an angry waiter.

Originally published in 1895 'Earl Lavender' situates itself at the heart of the decadent movement lampooning the times which Davidson, a Scotish poet who'd relocated to London, found himself living through.

In truth I found much of the book a bit of a chore.  It's often very funny but the combination of the overly descriptive Victorian prose and the Earl's florid soliloquies kept pushing me from the pages but perseverance proved that behind these niggles was a book well worth experiencing.

Affiliate links are provided for your convenience and to help mitigate running costs.
Posted by ian holloway at 18:45