The Last Steamer and Other Strange Tales 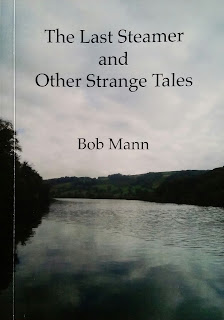 For several years, Totnes writer and Longmarsh Press founder Bob Mann has given to friends and family a short story at Christmas, instead of a card. These are mainly of a supernatural nature and are firmly rooted in his knowledge of the locality and its history and culture. Now he has decided to share some of them with a wider audience.
The Last Steamer and Other Strange Tales contains weird visions, disturbing ladies, long-vanished music and mysterious time slips, mainly set in recognisable buildings and terrains.

I found out about this collection of folky / ghosty tales via a post by Mark Valentine on his fantastic Wormwoodiana blog.  His write up made this sound like a very enticing prospect with elements of M.R. James and Arthur Machen.  I'm always on the look out for new, interesting things to read so I nabbed a copy.

It is an intriguing read consisting of stories written mostly in the stead of Xmas cards which for the most part feature Bob himself in an almost occult investigator type role reporting on various ghostly visitations, unearthly phenomena or eerie circumstance in and around the area of Totnes, Devon.

There's not much to most of the stories but there are two in particular that stand out.  The title piece is an intriguing little tale of a ride on a phantasmal steamer and the book's longest story, 'Early Music', which aside from some, let's say, clunky sexual politics is a fun story of love expressed across time and recognition achieved.

Mark is certainly not wrong in drawing parallels with James and Machen as each shows a clear influence but in the end it's all a little well mannered and lacking in bite and what we have is a relatively charming collection that offer an insight into one man's hobby.

If you enjoy what we do here on Wyrd Britain and would like to help us continue then we would very much welcome a donation towards keeping the blog going - paypal.me/wyrdbritain
Posted by ian holloway at 17:53