In A Glass Darkly 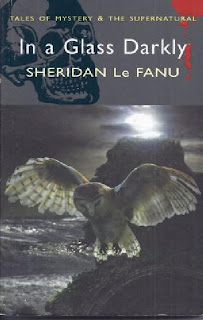 This remarkable collection of stories, first published in 1872, includes Green Tea, The Familiar, Mr. Justice Harbottle, The Room in le Dragon Volant, and Carmilla. The five stories are purported to be cases by Dr. Hesselius, a 'metaphysical' doctor, who is willing to consider the ghosts both as real and as hallucinatory obsessions. The reader's doubtful anxiety mimics that of the protagonist, and each story thus creates that atmosphere of mystery which is the supernatural experience.

This is my first time digging into a book full of Le Fanu's stories and I found it to be a bit of a pick 'n' mix.

The book tells 5 stories from the files of Dr. Hesselius, an occult detective of sorts, although he himself appears only in one of tales with the 5 being presented as being posthumously selected from his archives.

It's the final story here that's undeniably the most renowned and justifiably so.  'Carmilla' is an unsettling tale of vampirism which while lacking in suspense due to the delivery method (it's told by the 'victim') it manages to hold a tantalising level of menace.

At the other end of the scale is 'The Room in Le Dragon Volant' a frankly risible locked room mystery that was a chore to plough through.

The opening two stories, 'Green Tea' and 'The Familiar' are odd little tales of manifestations induced by overindulgence and guilt and neither tale really sparkles although the latter has the edge but it's the fourth story, 'Mr. Justice Harbottle', that was probably the great surprise of the book with it's deliciously macabre tale of a corrupt judge and his unearthly comeuppance.

I have to admit I struggled a little with this book; mostly with Le Fanu's now quite dated prose style - which had never previously been an issue when encountering his stories in various anthologies - but also because I just didn't think all that much of the opening story, 'Green Tea', ground to a halt and put the book down for a while.  When I returned to it more prepared for it's idiosyncrasies I got more out of it and with the exception of that lousy crime story it proved to be an enjoyable read.

If you enjoy what we do here on Wyrd Britain and would like to help us continue then we would very much welcome a donation towards keeping the blog going - paypal.me/wyrdbritain
Posted by ian holloway at 12:50