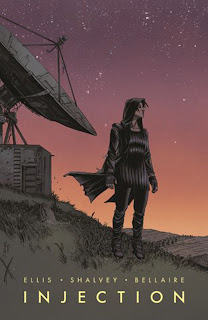 An archaeological dig in Cornwall has gone very wrong, very quickly. And Maria Kilbride has her hands full already, as the effects of the Injection begin to dig in. So Brigid Roth, her old comrade from the CCCU, gets hired to go to a stone circle in the middle of a moor, under a granite tor, to find out why a ritual murder might have torn a hole in the world. What is the Cold House?

The first two volumes of this series quickly established themselves as being amongst my favourite books.  Taking it's inspiration from various Wyrd Britain faves such as Quatermass, Sherlock Holmes, James Bond, Thomas Carnacki and Doctor Who it certainly rings all our bells.

After the Maria Kilbride (Quatermass) and the Viv Headland (Sherlock) stories of the first two volumes for this third one Irish computer type Brigid Roth does her Doctor Who thing and goes visiting a stone circle in Cornwall that has both a dead body and Maria's attention.  Upon her unorthodox arrival Brigid finds the circle to be very interesting indeed and there's a mysterious old professor with two students who seem suspiciously like henchmen hanging around.  When things inevitably go wrong it does so with almost apocalyptic effect.

As ever Warren has crafted a witty, immersive and downright exciting tale this time melding modern and ancient technologies in the manner of the best Nigel Kneale scripts.  There's a little bit of 'The Stone Tape' in there along with some 'Quatermass Conclusion' and a tiny smattering of Kneale's short story 'Minuke'.

The art team are on fire here particularly on the latter parts of the book when things start to kick off - just check out that image to the left there - although I did wonder why a newly unearthed stone circle would be so grassy.

As I said earlier, by the end of book 1 this was already a favourite and the two subsequent volumes have confirmed and strengthened this opinion and I'm only sorry that with only two books left in the series we are now past the halfway mark.

If you enjoy what we do here on Wyrd Britain and would like to help us continue then we would very much welcome a donation towards keeping the blog going - paypal.me/wyrdbritain
Posted by ian holloway at 14:23