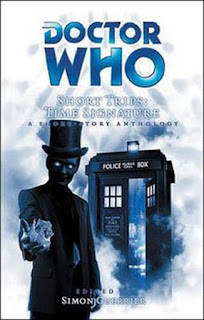 A city destroyed by time itself. A country torn apart by revolution. The Doctor doesn't just change the lives of those around him—his actions echo through history, as shown in these tales exploring the outer reaches of cause and effect.

This is the second of these BF Who hardbacks I've managed to score in the last little while.  I've tended to avoid them as they're a little pricey for my pocket but happily I've now come across two at vastly reduced prices so I've had the opportunity to sample them which I really wanted to do as the audios are fab - and I don't mean just their Who ones.

The first book I read was a pretty fun ride with mostly strong stories which is a template that's continued here.  Joff Brown's 'Walking City Blues' was a real highlight with the 6th Doctor in full on detective mode as was Eddie Robson's 2nd Doctor Delia Derbyshire homage, 'The Avant Guardian' and also Matthew Sweet's daft as an infested brush 'The Earwig Archipelago'.

As with the other volume there's a new companion that features in many of the stories and a vague narrative that runs through many of them that's set up by the two Simon Guerrier stories that I suppose were meant to bookend the contents but for some reason is continued, pointlessly and confusingly, in Andrew Cartmel's story which closes the book.

Truthfully, this one wasn't as good as the other and the through story was pretty ham-fisted and just got in the way but that aside as a collection of Who stories that I didn't know it was a pleasant way to spend a couple of afternoons.
Posted by ian holloway at 21:28