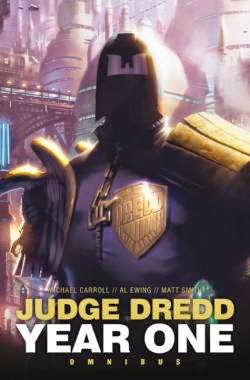 Three celebrated Judge Dredd writers take you back to Dredd’s first year on the streets of Mega- City One as a full-eagle Judge, in three thrilling novellas.
Bred to dispense Justice, the young Dredd is not the wizened veteran we know, but a Judge with built-in determination and little experience. In City Fathers, the brutal murder of a Justice Department-sanctioned spy uncovers something new and dangerous in the sector’s murky black market. Unless Dredd can stop it, chaos will be unleashed.
In Cold Light of Day, a savage killing spree results in the deaths of two highlyregarded Judges, and many consider Dredd to be responsible: a decision he made five years earlier – while he was still a cadet – has come back to haunt him. The third story in the collection will debut in this collection and is guaranteed to thrill.

3 prose novellas featuring the early street years of Judge Joseph Dredd two of which - Smith's and Carroll's - have appeared previously as ebooks but I can't get into the whole reading from a screen thing so happily this dead tree edition is most appreciated. I've read a few 2000ad novels in the past and with a couple of exceptions they were a fairly turgid bunch so curiosity but no great expectations sent me into this but I really enjoyed it.

All three stories are pretty much typical Dredd shorts with the exception that he is still a little inexperienced and the other judges have yet to learn to be in awe / fear of him and neither have the residents of Mega City One.

The three novellas touch on several key areas of the Dredd universe - control of the population (City Fathers), the brutality of the justice system, the city and the Cursed Earth (Cold Light of Day) and the corruption of Rico (Wear Iron).  They are all good, solid, fun reads with only Rico's complete corruption ringing false.  The level of contempt for the badge he displays would have had the SJS down on him in seconds.

There's nothing here to upset the applecart and as a prequel you know how everything is going to pan out but these are three entertaining Dredd backup stories that serve (and serve well) to put some detail into an aspect of Dredd's life that the comic has never covered.