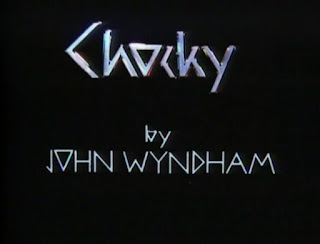 Matthew Gore is an ordinary sort of 12 year old; he can't draw particularly well, he's average at maths and isn't much good at cricket; that is until someone else takes up residence in his head.  That someone is an extra-terrestrial entity named Chocky and unusually for these sort of things she's not there to cause trouble.

Published in 1968 'Chocky' was John Wyndham's final novel. A YA novel of sorts; it's  rather gentle story marks a departure from the more overt post-apocalyptic scenarios - The Day of the Triffids, The Chrysalids -  that he was known for and in it's place is essentially a science fiction family drama that offers a different take on the idea of a possession or haunting. 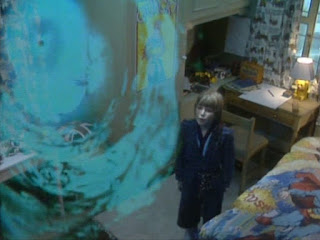 Adapted by former Doctor Who script editor Anthony Read (who also wrote episodes for both Sapphire and Steel and The Omega Factor) the show for the most part stays very close to the source material with a few minor changes such as making Chocky telekinetic and allowing her a physical manifestation of sorts.

It's a beautifully made series that just like the book exists in the hinterland between a kids story and one with a more adult nature.  The cast are uniformly excellent with Wyrd Britain regular, James Hazeldine (The Omega Factor, The Last Train, Ride, Ride) and Carol Drinkwater (All Creatures Great and Small) as Matthew's parents providing solid performances around which the show revolves and with Andrew Ellams producing a nicely measured performance as Matthew pulling off that most rare feat for a child actor of not being precocious or irritating.  My only complaint would be that the book's weak third act isn't improved any by seeing it on film.

The success of the series led to two more being produced that took Matthew and his alien friend on further adventures which we'll return to another time.

If you enjoy what we do here on Wyrd Britain and would like to help us continue then we would very much welcome a donation towards keeping the blog going - paypal.me/wyrdbritain
Posted by ian holloway at 11:48