The Man From the Diogenes Club 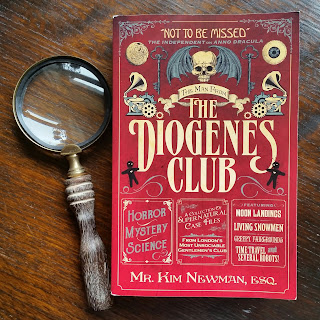 The debonair psychic investigator Richard Jeperson is the Most Valued Member of the Diogenes Club, the least-known and most essential branch of British Intelligence. While foiling the plot of many a maniacal mastermind, he is chased by sentient snowmen and Nazi zombies, investigates an unearthly murderer stalking the sex shops of 1970s Soho, and battles a poltergeist to prevent it triggering nuclear Armageddon. But as a new century dawns, can he save the ailing Diogenes Club itself from a force more diabolical still?
Newman’s ten mischievous tales, with cameos from the much-loved characters of the Anno Dracula universe, will entertain fans and newcomers alike.

For the last few years Titan Books have been reprinting Kim Nerwman's novels such as the Anno Dracula series, An English Ghost Story, Professor Moriarty and The Secrets of Drearcliff Grange School and now they've finally got to the one I've been waiting for.

There was much to like in the first Anno Dracula book - and by much I mean loads - but the part that really resonated with me was the use of Arthur Conan Doyle's Diogenes Club as the base of the secret service under the guidance of Mycroft Holmes.  A quick search showed me that Newman had written three books around this club and that they were now commanding eye-watering prices.  Well, the first one has finally been reprinted and it was well worth the wait.

This first collection of Diogenes stories focuses on flamboyant psychic investigator Richard Jeperson as he rampages around 1970s and 1980s (and into the 90s) England battling zombie nazis, witches, golems, snowmen, ghost trains and evil geniuses.  Jepperson is a pitch perfect amalgam of all your favourite spy-fi characters such as Jason King (who he looks like) and John Steed mixed with a healthy splash of the Jon Pertwee incarnation of the Doctor and a heritage of psychic detectives and adventurers such as Thomas Carnacki and Flaxman Low.

It's a glorious romp of a book and is tremendous fun throughout.  It feels like an unapologetic return to the pulp horror supernatural shenanigans of the era of it's setting.  There is so much fun to be had here cavorting around the last quarter of the 20th century and taking in the sites and sounds of the secret history of these decades and for those of you who weren't born or were elsewhere there's even a handy glossary of some of the more particular references although - and this is something mentioned in a story ('The Man Who Got Off the Ghost Train') but isn't featured in the glossary - as a Welshman and as a fan of the admittedly unattractive looking stuff I need to add that 'lava bread' (sic) is neither dry nor in fact bread but this is my tiny obligatory quibble with what is fantastic collection and a joyful mash up of all the best supernatural and sci-fi shenanigans of 60s and 70s British TV and is heartily and unreservedly recommended.

Buy it here - The Man From the Diogenes Club

Email ThisBlogThis!Share to TwitterShare to FacebookShare to Pinterest
Labels: books, Kim Newman, The Man From the Diogenes Club, Titan Books