The Plague of the Zombies 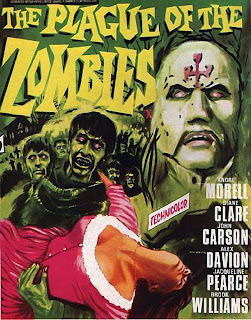 Made in 1966, just two years before George Romero revolutionised the genre, Hammer Studios gave the world what is perhaps the last great entry in the voodoo zombie genre.  'Plague of the Zombies' is the story of a small Cornish mining town plagued by a number of unexpected deaths.  To help him find the cause of this epidemic the doctor (Brook Williams) calls on the aid of his old tutor (Quatermass and the Pit's Andre Morell) who arrives to find a village in turmoil with even the Doctor's wife ('Servalan' herself Jacqueline Pearce) succumbing to the mystery affliction .

'Plague...' is in many ways fairly typical Hammer with it's period setting and it's backlot sets but behind this is a movie that is straining to break free of the confines of the studios reliance on the great monsters.  Beyond the shuffling creatures we have a story about class conflict and economic exploitation as the arrogant upper class Squire (John Carson) exercises power of life and (un)death over the villagers exploiting their lives and labours for his own greed while the educated gentlemen doctors strive to cure the plague and free the village.

With the exception of one rather vicious dream sequence it lacks much of the gore laden sensibility that would come to characterise the zombie genre but what we do have is a sympathetic script anchored by top notch performances from the cast - Morrell was one of the studios best and Pearce always shines even when, like here, her appearance is fleeting.  The end result is still very much a Hammer movie but one with an eye to where horror scripts would be heading in the coming decades.