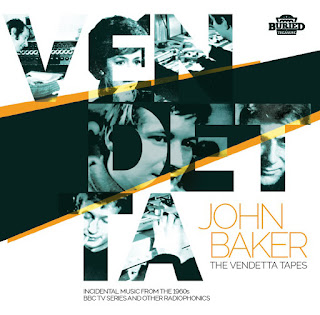 If I say that much of what you can hear here is typically Baker you will of course understand that by saying that I am by no means deriding anyone or anything and I am, in fact, giving it very high praise indeed.  Perhaps the phrase 'quintessentially Baker' would be more appropriate except what we have here is indeed that but also so much more.

Compiled by Alan Gubby, who was also responsible for the two fantastic 'John Baker Tapes' compilations released on Trunk Records a couple of years back, this newer album is a two part sort of deal. 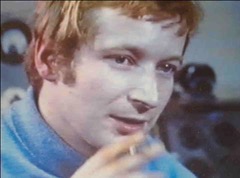 For the most part it's Baker's contributions to the soundtrack to 'Vendetta' a Mafia thriller produced by the BBC in the 1960s.  On these tracks we get to hear his characteristic processed and layered twangs, clonks and sprongs melded seamlessly with jazz melodies and instruments.  I must admit to having been sceptical when I first heard of this release as to how well these two things would merge and whether they could transcend any novelty factor well, they do, they can and I'm an idiot for thinking otherwise.  The fusion creates music that is a pure delight; an honest, purposeful and extraordinary marriage of Radiophonic Workshop eccentricity with giallo cool.

The rest of the album is where that 'quintessentially Baker' thing I mentioned earlier comes in with a selection of tracks that were left over from the 'John Baker Tapes'.  These show his mastery of rhythm and melody with both showcased through his meticulous cut and paste methodology to produce music that will be as familiar to entire generations of Brits as it is still perplexing, exhilarating, capricious and mesmerising.

Hugely recommended and available digitally (below) with limited numbers of LPs and CDs still available.