The League of Extraordinary Gentlemen: Nemo 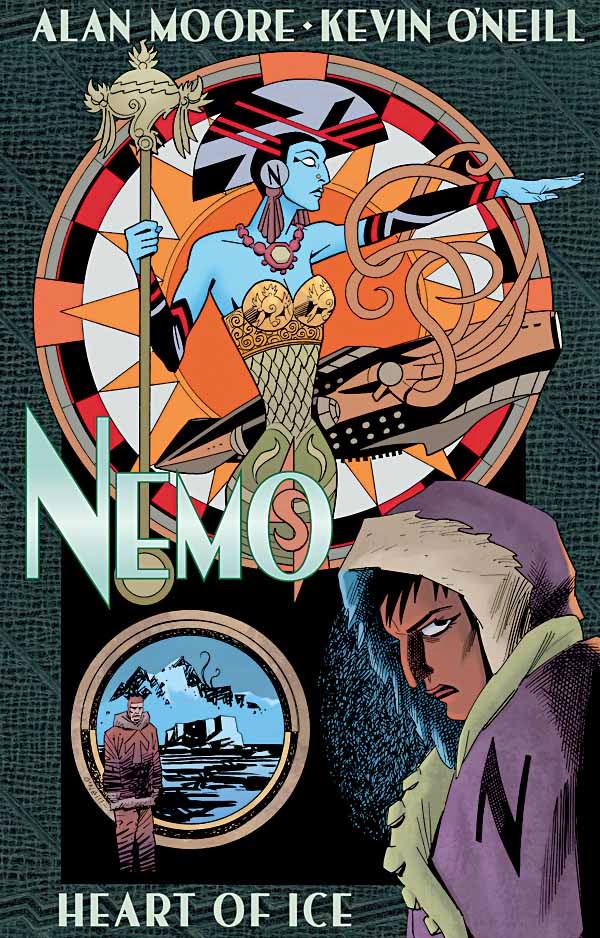 In the grim cold of February surfaces a thrilling new League of Extraordinary Gentlemen book - Nemo: Heart of Ice, a full-color 48-page adventure in the classic pulp tradition by the inestimable Alan Moore and Kevin O'Neill. It's 1925, fifteen long years since Janni Dakkar first tried to escape the legacy of her dying science-pirate father, only to accept her destiny as the new Nemo, captain of the legendary Nautilus. Now, tired of her unending spree of plunder and destruction, Janni launches a grand expedition to surpass her father's greatest failure: the exploration of Antarctica. Hot on her frozen trail are a trio of genius inventors, hired by the megalomaniacal Charles Foster Kane to retrieve the plundered valuables of an African queen. It's a deadly race to the bottom of the world - an uncharted land of wonder and horror where time is broken and the mountains bring madness.

A very unexpected surprise when this appeared.  I'd heard that they were going to do these spin-offs but I wasn't expecting one to turn up this soon. 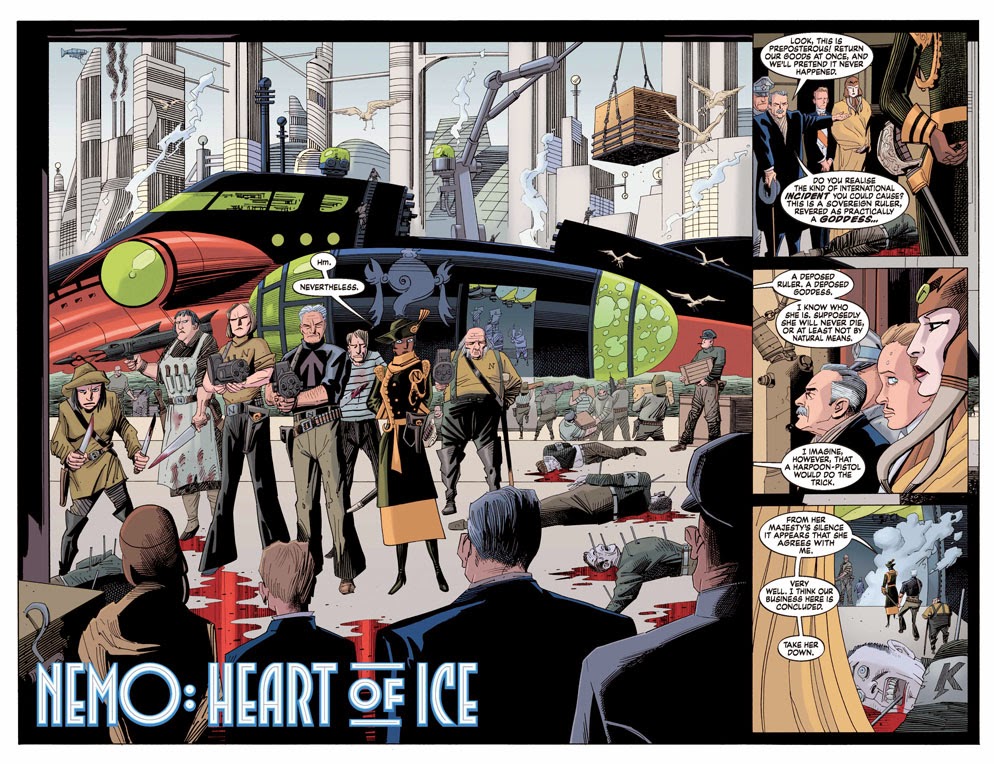 What we have is a missing tale of the second Captain Nemo and her attempt to traverse Antarctica in the footsteps of her father.  In pursuit of her and her crew is a trio of American adventurers in the employ of Charles Foster Kane and Ayesha (the Queen from 'She').  On their disastrous journey they discover various Lovecraftian locations and creatures.

It's a fairly slight (by Moore's terms) little romp but one that adds layers to the character of Janni (Nemo) and very nicely bridges the gap between the vengeful Janni of the first volume of 'Century' and the mellower mature one that turned up later.

I've loved all the League stories and this one was no exception.

(Jess Nevins' annotations to this volume can be found here) 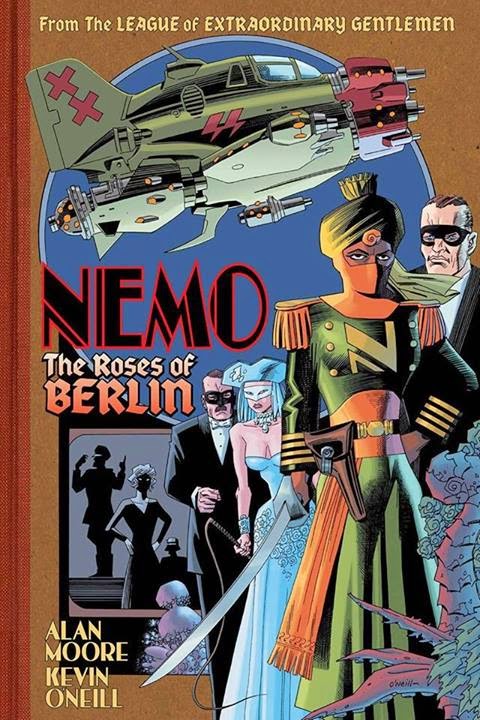 Sixteen years ago, notorious science-brigand Janni Nemo journeyed into the frozen reaches of Antarctica to resolve her father's weighty legacy in a storm of madness and loss, barely escaping with her Nautilus and her life.
Now it is 1941, and with her daughter strategically married into the family of aerial warlord Jean Robur, Janni's raiders have only limited contact with the military might of the clownish German-Tomanian dictator Adenoid Hynkel. But when the pirate queen learns that her loved ones are held hostage in the nightmarish Berlin, she has no choice save to intervene directly, travelling with her ageing lover Broad Arrow Jack into the belly of the beastly metropolis. Within that alienated city await monsters, criminals and legends, including the remaining vestiges of Germany’s notorious ‘Twilight Heroes’, a dark Teutonic counterpart to Mina Murray’s League of Extraordinary Gentlemen. And waiting at the far end of this gauntlet of alarming adversaries there is something much, much worse.
Continuing in the thrilling tradition of Heart of Ice, Alan Moore and Kevin O’Neill rampage through twentieth-century culture in a blazing new adventure, set in a city of totalitarian shadows and mechanical nightmares. Cultures clash and lives are lost in the explosive collision of four unforgettable women, lost in the black and bloody alleyways where thrive THE ROSES OF BERLIN.

This is the second League of Extraordinary Gentleman spinoff books to feature the exploits of everyone's favourite sub aquatic pirate goes off to Germany to rescue her daughter and her son in law, the air pirate Robur. 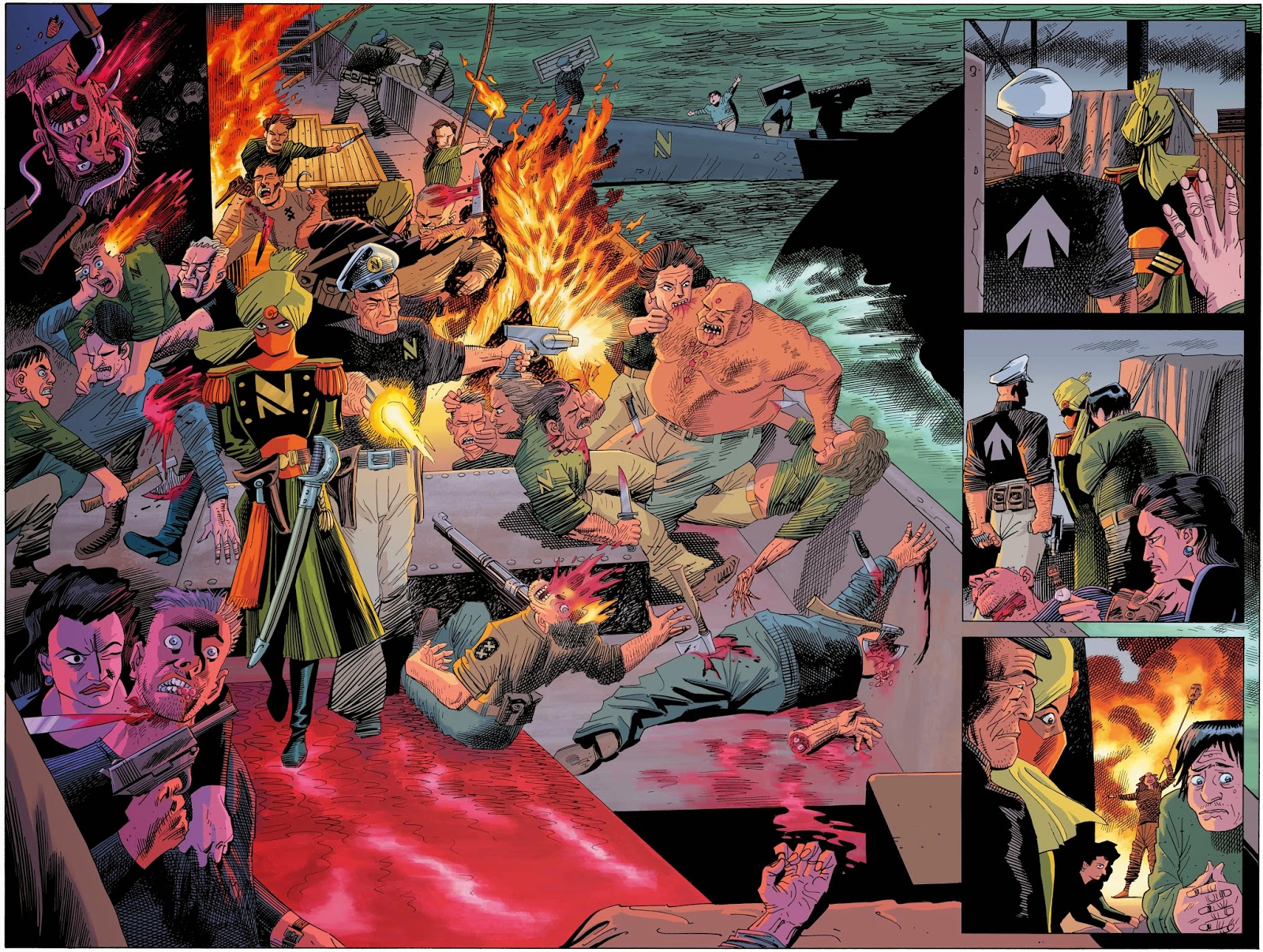 The book mixes in The Great Dictator, Metropolis, Cabinet of Doctor Cagliari, She and more to great effect. I've got to say though that if it wasn't for the majesty of Jess Nevins and his explanatory website - http://jessnevins.com/annotations/rosesofberlin.html - much of it would have been incomprehensible to me as it was written in German and I don't currently have a friendly German to hand..

It's a quest book (of sorts) and as such is a little thin on plot but what there is is typical Moore and there is plenty of distraction in the always beautiful art from O'Neill who as ever brings the most absurd worlds to life in stunning, awe inspiring and eye popping glory.
Not the best of them but still wonderful. 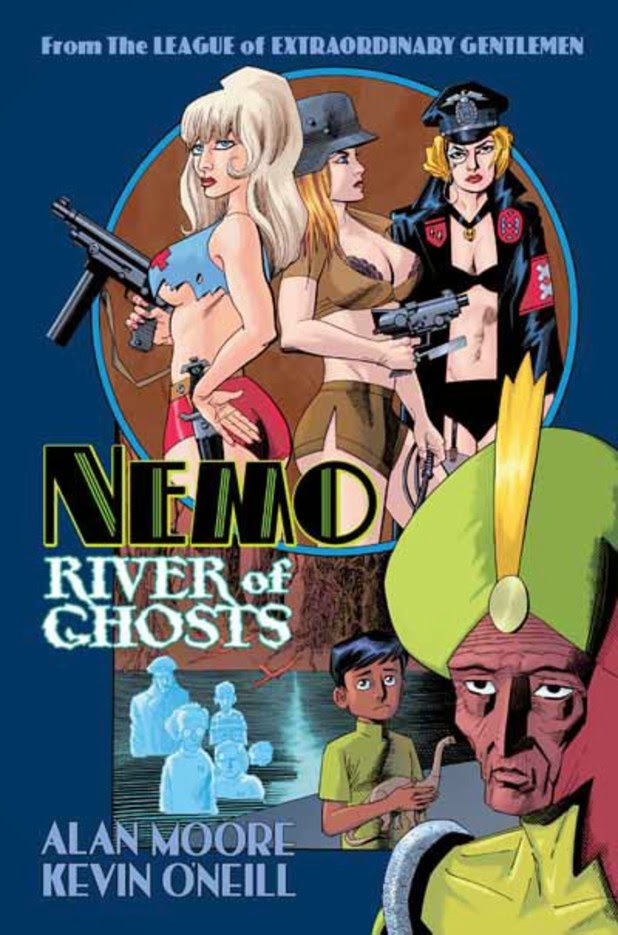 In a world where all the fictions ever written coalesce into a rich mosaic, it’s 1975. Janni Dakkar, pirate queen of Lincoln Island and head of the fabled Nemo family, is eighty years old and beginning to display a tenuous grasp on reality. Pursuing shadows from her past — or her imagination — she embarks on what may be a final voyage down the vastness of the Amazon, a last attempt to put to rest the blood-drenched spectres of old. With allies and adversaries old and new, we accompany an aging predator on her obsessive trek into the cultural landscape of a strange new continent, from the ruined city of Yu-Atlanchi to the fabulous plateau of Maple White Land. As the dark threads in her narrative are drawn into an inescapable web, Captain Nemo leads her hearse-black Nautilus in a desperate raid on horrors believed dead for decades. Through the exotic spectacle of an imagined South America, Alan Moore and Kevin O’Neill steer their fifty-year-long Nemo trilogy to its remarkable conclusion, borne upon a River of Ghosts.

And with this volume - the third - the story of Janni Nemo comes to a close and the next inheritor of the mantle takes their place.

This time out  it's a much more straight forward read - particularly in comparison to it's immediate predecessor for which you needed a handy German to translate large swathes of the dialogue.  Here, the aged and dying Nemo sets out on one last adventure to investigate the apparent reappearance of Ayesha despite having killed her in the previous volume's Germany of Adenoid Hynkel. 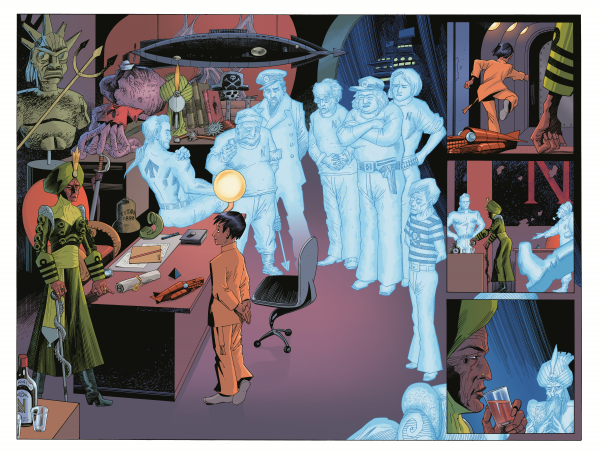 As ever the references abound and as ever I'm missing loads of them but a few of the more obvious ones include The Creature from the Black Lagoon, The Stepford Wives, Desperate Dan and The Lost World.

This isn't Moore at his most engrossing it's simply Moore cutting loose and letting the grand lady have the blood and fire send off and decisive conclusion she deserves (and desires).  O'Neill is, as ever, flawless.

An explosive final chapter to an excellent series.  Hopefully not the last we'll see of the League though as it's easily one of my favourite things.

(Jess Nevins' annotations to this volume can be found here)
Posted by ian holloway at 14:39