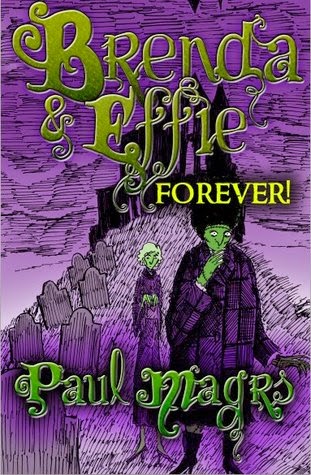 'Brenda and Effie Forever!’ is an outrageous Gothic adventure involving ancient vampires, miniature mermaids, the Phantom of the Opera and his hunchbacked boyfriend, a fiendish ghost who drives a limousine, Mr and Mrs Claus and all three Bronte sisters discovered alive and well in a secret base under the parsonage at Haworth with a sentient, stuffed Art Critic called Panda.
Brenda and Effie are living it up on the continent. Holidaying in Paris, they are menaced by a mysterious Peeping Tom with a limp and a hump, who warns them that they must never return home to Whitby again. Untold disaster will take over the world if they go anywhere near the North Yorkshire coast…
But Brenda and Effie know that they simply have to return to Whitby, even if it means the end of everything they hold dear.
Brenda owns a Guest House by the sea and her best friend Effie runs the junk shop next door. But together they have another role as the guardians of Whitby against the vampires, daemons and creatures of the night that continually plague the quaint but terrifying town. Together Brenda and Effie must face the most startling dangers ever as they are engulfed by hideous secrets from their long-hidden pasts.
Can our heroines survive all these fiendish shenanigans and live to fight the powers of darkness another day?

And so we come to the last in the adventures of those most cantankerous and geriatric protectors of Whitby, Brenda the Bride of Frankenstein and her witchy neighbour Effie.

Making their way home from an enjoyable and relaxing European jaunt - well that last bit with the kidnapping and the vampires wasn't so enjoyable or relaxing but on the whole... - the pair find themselves warned off returning to Whitby so as to avert a prophesied calamity.  The vampires in particular seem most perturbed and insistent hence the rather rude kidnapping attempt.

Ignoring the warnings the pair make their way home and immediately find themselves embroiled in various palavers involving the grotesque Mrs Claus, miniature mermaids, the return of Mr. Danby and most crucial of all the Limbosine and it's regular abductions of Effie in order to stimulate some deeply buried memories.  As they return we find out Effie's past and Brenda's pre-ordained future.

As it's Paul Magrs you know it's going to be a fun and lightly written jaunt filled with mischievous appropriation and re-invention and this is indeed the case but aw a conclusion to the series it's just not up to snuff.  Too many threads are left hanging, characters behave in uncharacteristic ways that aren't addressed and the finale is both vague and rushed, not to mention deeply unsatisfying.  Truthfully it was almost on a par with '...and I woke up and it was all a dream.'

I have pretty much loved this series from a chance find of the first volume in a seaside charity shop and it's been a ride filled with fun and adventure that has touched on so many of my pulp, sci-fi, horror loves and woven them into Brenda's world.  The character's were a joy to spend time with and the warmth and (sometimes fractious) camaraderie was infectious fun.  As such I really hope this isn't truly the end as to leave it (and them) as he does would be a real shame.

A lovely series but an undeserving finale.

Email ThisBlogThis!Share to TwitterShare to FacebookShare to Pinterest
Labels: books, Paul Magrs, Snowbooks, supernatural, The Adventures of Brenda and Effie