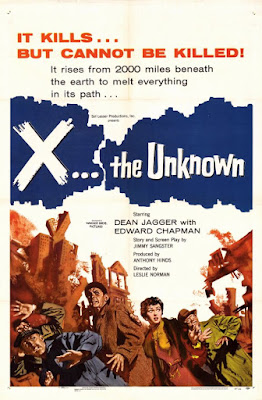 That esteemed home of dry facts and vile commenting IMDB tags X the Unknown with the rather marvellous one sentence synopsis, 'Radioactive mud-like creature terrorises a Scottish village during the 1950's.'  It's not entirely accurate but in essence pretty much sums up this little gem.

X the Unknown was made in 1956 by Hammer initially intended as a follow up to The Quatermass Xperiment (can you spot the similarity) but were denied use of the title character by Nigel Kneale.  Continuing regardless with both the movie and also with the practise of casting an American in the title role, Dean Jagger here and Brian Donlevy in the first two Quatermass movies, in order to hopefully widen the appeal of the film to US audiences regardless of whether the presence of an American working in a Scottish nuclear research testing station or even running the British Experimental Rocket Group was at all incongruous.

The Unknown X of the title is a large blob creature from the dawn of time that feeds on radiation.  It is drawn to the surface by soldiers conducting Geiger Counter field tests and soon begins to hone in on rather more sumptuous feasts including the experiments and workplace of our Bernard Quatermass substitute, Dean Jagger's  Dr. Adam Royston.

Jagger has far too little charisma to hold his own at the centre of the film but is ably assisted by a strong supporting cast that includes Edward Chapman (more famous for his role as Mr. Grimsdale opposite Norman Wisdom), Leo (Rumpole of the Bailey) McKern and Anthony Newley in a short but sweet role as Lance Corporal "Spider" Webb whose delivery of the word 'Tea' (and his short scene that follows) is just perfect.

There's a reason X the Unknown isn't as fondly remembered or celebrated as the Quatermass movies, it just isn't as good but few things are.  It does however maintain a fairly breathless pace throughout, has some nice set pieces and isn't afraid to let things get a little gory and intense (the lustful radiographers melting face being the main thing that springs to mind here).  It has it's charm and it has it's fans (including me) and at only 75 minutes is a great way to while away an afternoon.

If you enjoy what we do here on Wyrd Britain and would like to help us continue then we would very much appreciate a donation towards keeping the blog going - paypal.me/wyrdbritain
Posted by ian holloway at 00:48