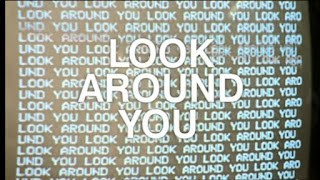 When people talk about the golden age of British television comedy you can be fairly sure they're about to rehash tired old cliches about everything from 'Hancock's Half Hour' and 'Steptoe and Son' to 'Fawlty Towers' or 'Only Fools and Horses' but personally these shows and their ilk left me cold.  I was entirely the wrong generation and of a very different inclination to find any of them at all funny.  For me comedy first properly grabbed my attention with 'The Young Ones' but my golden age includes shows such as 'The Day Today', 'Brass Eye', 'Jam', 'Spaced', 'Black Books' and the hauntological fever dream that was 'Look Around You' 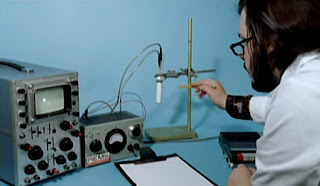 Created by Robert Popper and Peter Serafinowicz 'Look Around You' was, in it's first series, a note perfect and fabulously daft pastiche of the types of daytime educational shows that you half watched when the TV was wheeled into the class in school or which you stared at uncomprehendingly over a snotty tissue when home ill. The second series featured longer episodes in the pop-science style of 'Tomorrow's World' that introduced the country to amongst other things The Petticoat 5 "the computer made by women for women", synthesizers and rap music. 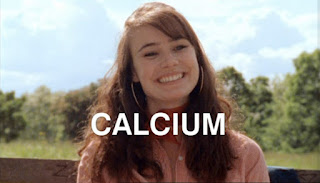 As fun as the second series is, it's that first series of 10 minute shorts (plus the double length pilot you can watch below) that's the gem.  The pair perfectly captured the cheap and cheerless nature of these shows and each episode is filled with incomprehensible experiements, lingering shots of beakers, wires and oscillators, absurdly named equipment, grimy 1980s landscapes, bearded scientists and pencils, pointing.  It's an obvious labour of love that no matter how often I watch it never fails to evoke disquietingly flu-like feelings of nostalgia.

"Please ensure you have your copy book at hand as you'll be asked to take down notes from the screen at various points throughout the programme."

Affiliate links are provided for your convenience and to help mitigate running costs.
Posted by ian holloway at 19:21

Email ThisBlogThis!Share to TwitterShare to FacebookShare to Pinterest
Labels: Look Around You, TV Series