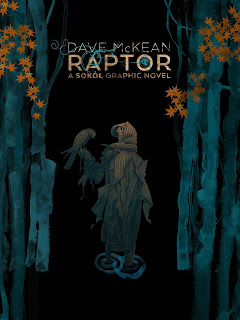 I've always been more inclined towards words than pictures and so chose my comics based primarily on who the writer was but there are a few comic artists whose work I just can't resist, Eddie Campbell is one, Kevin O'Neill and Ted McKeever too and Dave McKean is most definitely another.

Like many it was his eye-popping cover art to Neil Gaiman's Sandman comics - which incidentally I got to see in the really real at an exhibition and they were astonishing - as well as books like Violent Cases, Signal to Noise and Arkham Asylum - that introduced me to his work.  In the years since his art and his designs have also graced films (including 'Mirrormask' and Harry Potter's 'Dementors'), books (such as John Cale's autobiography 'What's Welsh for Zen' and Iain Sinclair's 'Slow Chocolate Autopsy') and numerous album covers ( by folks like Dream Theater, Front Line Assembly and Alice Cooper). 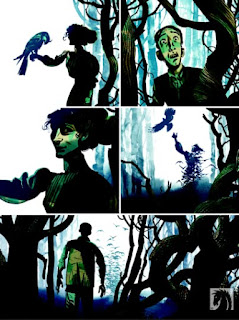 Raptor is the latest in a line of creator owned works he's produced and is presented in a beautiful large format and sumptuous edition that allows his paintings the space they deserve.  The story is split across two realities featuring 'Sokol', a monster hunter in a fantasy land, and a newly widowed Welsh writer of supernatural stories named 'Arthur'.

As should be expected from McKean it's stunning to look at and filled with beauty. Storywise I think it could have done with a little more space to develop but as a tale of loss, grief and the corrupting influence power it was certainly intriguing and Mckean makes fine use of the medium blending perspectives and bleeding the two realities into each other as Arthur strives for just one more glimpse of his recently deceased wife in what made for a fascinating read that touched on Machen, A.E. Waite and the Golden Dawn.

Affiliate links are provided for your convenience and to help mitigate running costs.
Posted by ian holloway at 15:15