The Great God Pan and Other Horror Stories 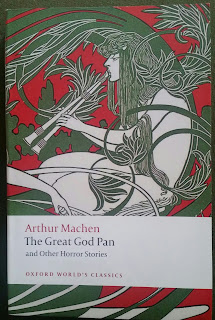 Something pushed out from the body there on the floor, and stretched forth a slimy, wavering tentacle...
Perhaps no figure better embodies the transition from the Gothic tradition to modern horror than Arthur Machen. In the final decade of the nineteenth century, the Welsh writer produced a seminal body of tales of occult horror, spiritual and physical corruption, and malignant survivals from the primeval past which horrified and scandalised-late-Victorian readers. Machen's "weird fiction" has influenced generations of storytellers, from H. P. Lovecraft to Guillermo Del Toro-and it remains no less unsettling today.
This new collection, which includes the complete novel The Three Impostors as well as such celebrated tales as The Great God Pan and The White People, constitutes the most comprehensive critical edition of Machen yet to appear. In addition to the core late-Victorian horror classics, a selection of lesser-known prose poems and later tales helps to present a fuller picture of the development of Machen's weird vision. The edition's introduction and notes contextualise the life and work of this foundational figure in the history of horror. 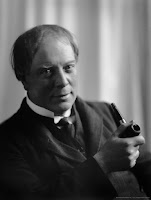 When Arthur Machen died in 1947 he left behind a body of work that has proved to be amongst the most quietly influential writings in the fields of strange fiction.  Various authors, film-makers, musicians and the society that bears his name have all promoted and been inspired by his work and as such collections are often to be found.  Now, I'm of the mind that all Machen collections are good Machen collections but occasionally a real gem appears as is the case here.

Produced as part of the Oxford World's Classics series and dressed in a cover illustration of Pan dating from 1895 - the year after Machen published the title story here - by William H Bradley, the doyen of American Art Nouveau illustrators, editor Aaron Worth has compiled an eye wateringly wonderful assortment of gems taken from every era of Machen's career.

There are of course certain stories that one can guarantee will be present in any collection, the title piece, 'The Shining Pyramid', 'The White People' & 'The Bowmen' but rather than just giving us the two more famous parts of 'The Three Impostors' - 'The Novel of the Black Seal' & 'The Novel of the White Powder' - he has, rather wonderfully, included the entire novel.  Alongside these undoubted gems we find later gold such as Machen's thin place story 'N', the simple kindness of 'Tree of Life', the hidden pagan rites of 'The Ceremony', and the alchemical experiments of 'The Inmost Light' amongst many others.

As a collection it works on both levels required of such a book, it provides a wide ranging overview of the authors work featuring both the more feted and the less read tales but equally for those with a more established love of the work it is simply a well selected overview that will allow you to revisit old favourites and passing acquaintances.

Email ThisBlogThis!Share to TwitterShare to FacebookShare to Pinterest
Labels: Arthur Machen, book, The Great God Pan and Other Horror Stories