The Occult Files of Francis Chard 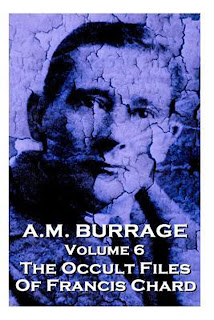 Alfred McLelland Burrage was born in 1889. His father and uncle were both writers, primarily of boy's fiction, and by age 16 AM Burrage had joined them and quickly became a master of the market publishing his stories regularly across a number of publications. By the start of the Great War Burrage was well established but in 1916 he was conscripted to fight on the Western Front, his experiences becoming the classic book War is War by Ex-Private X. For the remainder of his life Burrage was rarely printed in book form but continued to write and be published on a prodigious scale in magazines and newspapers. His supernatural stories are, by common consent, some of the best ever written. Succinct yet full of character each reveals a twist and a flavour that is unsettling.....sometimes menacing....always disturbing. In this volume we bring you - The Hiding Hole, The Pit In The Garden, The Affair At Penbillo, The Third Visitation, The Woman With Three Eyes, The Soldier, The Tryst, The Bungalow At Shammerton, The Protector & The Girl In Blue.

I've been on a real detective trip of late but I managed to hold off for a fortnight before it was time to indulge myself in some more supernatural sleuthing with a selection from the author of my favourite ghost story, 'Playmates'.  It took me a while to cough up the readies for this slim volume, number 6 in a series of reprints of Burrage's work, which features the escapades of his detective character Francis Chard and his companion Torrance as the pair investigate a series of unearthly, chilling and unpleasant supernatural episodes but in the end desire overcame thrift.

As is ever the case with these sort of things Chard is a veritable font of knowledge regarding all things supernatural whilst Torrance is suitably dim enough to allow us some semblance of a clue as to what's going on as things are explained to him. There's a satisfying humanity to the pair and they seem a comfortable partnership with each coming to the others aid as they often struggle through their adventures occasionally coming a bit of a cropper or finding themselves scared witless.

I've encountered a few of Burrage's stories before (the above mentioned 'Playmates' and 'Smee' are both regular in spooky anthologies) and have always found him to be very readable which proved to be the case here.  The stories are inventive and adventurous with a unexpectedly violent streak and his characters are believable and engaging.

As I said I initially balked at paying the asking price for this tiny little booklet but I have to admit, in the end, I'm glad I paid it.

If you enjoy what we do here on Wyrd Britain and would like to help us continue then we would very much welcome a donation towards keeping the blog going - paypal.me/wyrdbritain
Posted by ian holloway at 12:18