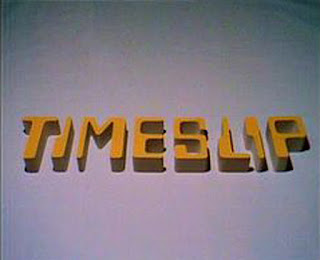 On the 28th of September 1970, and for the next 26 weeks, Simon Randall (Spencer Banks) and Liz Skinner (Cheryl Burfield) slipped through a hole in the 'Time Barrier' which allowed them to explore both the past and alternate futures.  Along the way they encountered German invaders, megalomaniac scientists, clones and various future versions of themselves.  All of which was fairly typical of life in the UK in the early 70s.

Developed by Ruth Boswell (who would later also develop 'Escape Into Night' and produce 'The Tomorrow People') Timeslip was a deliberate attempt to tap into the Doctor Who audience in a kid friendly manner whilst addressing issues (such as environmentalism and authoritarianism) that were as relevant then as they are now.  It's two leads, the emotional and plucky Liz and the bookish and serious Simon both throw themselves into their roles, each maturing into their respective parts while the rest of the cast, which includes Denis Quilley as Traynor and Gerry Anderson alumni David Graham (the voice of Brains in Thunderbirds) as Simon's future self, Controller 2957, are all very watchable. 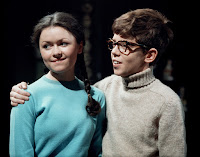 Even though it was filmed in colour the original tapes degraded and only the 12th episode (the last part of the second series) remains in colour, the others are all black and white telerecordings.

Amongst its supporters Timeslip is very fondly remembered - some of whom have produced the excellent Timeslip website - but it's a show that seems to have slipped (sorry) off many people's radars and is one that rarely seems to be mentioned anymore which is a shame as it's definitely worth your time (sorry).

Buy it here - Timeslip: The Complete Series [DVD] - or watch it below.