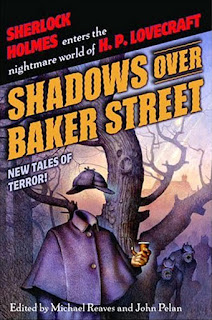 Sherlock Holmes enters the nightmare world of H.P. Lovecraft
New Tales of Terror!
What would happen if Sir Arthur Conan Doyle's peerless detective, Sherlock Holmes, and his allies were to find themselves faced with Lovecraftian mysteries whose solutions lay not only beyond the grasp of logic, but beyond sanity itself. In this collection of original tales, twenty of today's cutting-edge writers provide answers to that burning question.
Contributors include Neil Gaiman, Brian Stableford, Poppy Z. Bright, Barbara Hambly, Steve Perry, and Caitlin R. Kierman. These and other masters of horror, mystery, fantasy and science fiction spin dark tales within a terrifyingly surreal universe.

I've known of this book for quite a while after happening across a copy of the Neil Gaiman story 'A Study in Emerald' in one of his anthologies.  Just how good that story is notwithstanding I always felt that the melding of the world's of Sherlock Holmes and H.P. Lovecraft's mythos was a fairly daft idea.  Holmes' world is the antithesis of Lovecraft's creation which shows in some of the clodhopping attempts to shoehorn one into the presence of the other in this collection.  It strikes me that the only truly effective way of doing this would be to utterly abandon the Holmes reality and retain only the characters.  You would need to abandon Holmes' rational mind set and instead reinvent him as an occult detective with the supernatural playing a part throughout his life rather than a sudden, "Oh look, a monster!" or a "Watson, there's something I never told you..." both of which make numerous appearances here.

It isn't all awful though, not by a long stretch, and indeed there was only one story that truly taxed my patience but equally only one that I can honestly say I enjoyed and that one opened both the book and this review.

If you're a fan of that whole literary mash-up genre then you may well find much to like here but for me it was an interesting experience but one where most of those involved failed to really get stuck into the concept and do anything truly interesting.
Posted by ian holloway at 12:08