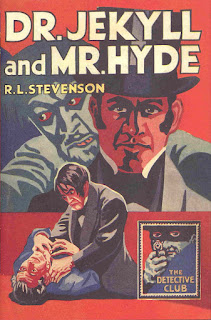 The latest in a new series of classic detective stories from the vaults of HarperCollins is a reissue of one of literature’s most audacious and thought-provoking novels of murder and intrigue, in hardback with its 1929 cover design and a brand new introduction.
“The Detective Story Club”, launched by Collins in 1929, was a clearing house for the best and most ingenious crime stories of the age, chosen by a select committee of experts. Now, almost 90 years later, these books are the classics of the Golden Age, republished at last with the same popular cover designs that appealed to their original readers.
Originally published in 1886 as “Strange Case of Dr Jekyll and Mr Hyde”, Robert Louis Stevenson’s book had been propelled to massive success following a favourable review in The Times, and by 1901 had sold a quarter of a million copies. This is how the Detective Club described the book:
‘In addition to being one of the most amazing crime stories ever written, “Dr Jekyll and Mr. Hyde” is probably the most remarkable of all the writings of Robert Louis Stevenson. It would be unfair to the reader to give away the secret of this thriller. Suffice it to say that every page grips and the unforgettable portrait of a mast criminal takes shape until the sensational climax is reached, a climax of dramatic intensity, without equal in the realm of detective fiction. If one wished to append a moral to this crime fantasy it might well be this: “The self you choose to-day, and not the self you chose yesterday, is the fate of to-morrow.”’
This new printing includes a brand new introduction by classic horror story expert, Richard Dalby.

This is one of those books that I've always wanted to read but have simply never found a nice copy of.  Cover design goes a long way to deciding which edition of a book I buy and on the day I bought this I'd passed on two others in two different shops.  The one I settled on is a reproduction of an edition originally released in the early 20th C. by The Detective Story Club. I liked the pulp fiction vibe of the cover and being a new edition it was immaculate so I took the plunge. 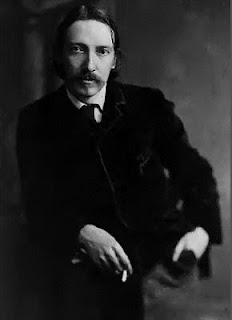 Now, before I start on the main story I'm going to point out that more than half of this edition is padding.  The actual story is a novella of only 82 pages so to make up the other 98 they've added a number of things; two Stevenson shorts - his fabulous resurrection men tale 'The Bodysnatchers' and another called 'Markheim' which there really didn't seem much point in reading because the ending had already been revealed (spoiled) in the book's introduction by Richard Dalby - I'll return to it some other time when memory has faded - there's also an afterword dating from the 1929 edition.  The oddest inclusion though is of two unauthorised sequels by Francis H. Little and Robert J. McLaughlin.  Of the first, just 5 pages proved there to be nothing of interest there and of the second, well, I didn't even try.  Unprofessional of me? Possibly so but I am but a humble amateur and by then other more intriguing looking books were beckoning from the shelf.

So, just the main story to discuss then.

Like the rest of you I know the most basic of premises for the story - Doctor makes potion that makes him fall behind a settee and then get up again as a hairy evil, troglodyte looking fellow - which is pretty accurate as far as it goes (apart from the settee bit) but does nothing to restraint and subtlety of the story.

Jekyll's story is told in a number of ways via an acquaintance - a lawyer named Utterson, who in addition to his meetings with and observations of the two titular men also receives various verbal and written accounts of their actions via numerous other acquaintances and finally from Jekyll himself.

The Doctor is portrayed as a well intentioned but ultimately deeply flawed man whose weaknesses lead him to let loose his darker side to the point where it's depredations consume him and he loses his identity to the other.

Stevenson never lingers on Hyde's activities, indeed we are really only presented with examples of a couple of his callous and evil actions and neither does he preach at the reader.  We are left to sympathise, empathise or despise Jekyll at our will and this moral ambiguity on the part of the author allows the reader a greater investment in the story and a much deeper appreciation of the flaws of both man and the society that binds him.
Posted by ian holloway at 12:03