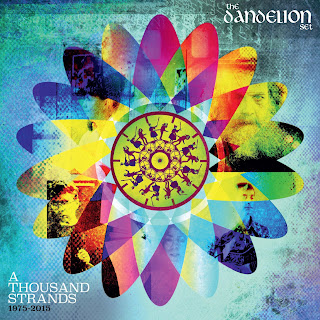 So, as some of you know I spent much of the second half of  last year pretty immobile due to numerous broken bones and the ensuing surgical procedures.  Truth to say it wasn't a whole lot of fun.  I was on quite a lot of morphine and as such watching films or reading books was out as I couldn't follow a plot and so I found myself staring at a lot of daytime TV - side note:  not even morphine makes Jeremy Kyle any less noxious - and listening to copious amounts of music, so much in fact that I quickly ran out of what was to hand and so began searching around for new delights to do interesting things in my ears and my opiate addled brain.

One of the things I stumbled across was the Buried Treasure label whose John Baker Vendetta Tapes became one of my most played albums of last year.  In fact, if you check out my end of year list you'll find several Buried Treasure releases on there with several others not making the list simply due to numerical considerations.  So it was with real excitement that I opened the promo copy sent by label honcho Alan Gubby of this, the first B.T. release of 2016 by psychedelic troubadours The Dandelion Set here ably assisted by one of the spiritual godfathers of what we do here at Wyrd Britain,  Mr. Alan Moore.

Expectation, as we all know, can be a real bitch and I'd heard some Dandelion ditties on the recent B.T. comp, 'The Delaware Road', and I know now that Alan G. has an ear for the wonderful so this had a lot to live up to; an awful lot to live up to.  We've all been down that road of getting all 'kid at xmas' about a new release only for it to turn out to be more of a 'kid at dentist' experience but now and again under the tree, wrapped in some beautifully psychedelic wrapping is that perfect gift and it surpasses all expectations. 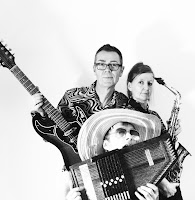 From the opening moments of 'Pristina Strawberry Girl' we know that we're in for a trip of a ride as dreamy psyche-pop insinuates itself into the room before the wordy wizard of Northampton weaves a weirdy, wandering narrative over a skronking frug noir soundscape and so the scene is set.

Angular prog excursions make way for forays into the realms of opiated French jazz pop.  Playful dances of electronic fireflies throw themselves through animated radiophonic swirls of psychedelic colour as tales of love, loss, hopes, delusions and a trip to the cinema stand square, stark and unflinching basking in the hallucinatory haze and calling you into this twisting, writhing, mesmerising world.  A technicolour playground of lysergic intensity and intent filled with love and magic.

'A Thousand Strands 1975 - 2015'  is released on 22nd April and Bandcamp pre-orders of the physical editions - LP / CD / Cassette - are sold out from the label - that's how good this album is - but will be available from an independent music supplier - shop independent and say no to tax avoiding multinationals - near you upon release.

Meanwhile here is a taster featuring the mighty Alan Moore, below that a video montage featuring live footage from 'The Delaware Road' launch gig and later this week you can hear a track on the next Wyrd Britain show on Mixcloud.