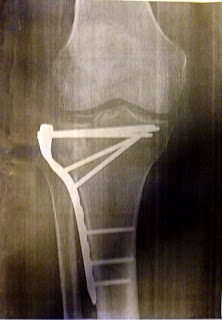 So, happy new year to you all.  I hope 2016 brings you good times aplenty.

For much of the last 6 months of 2015 I was fairly immobile due to the whole broken leg fiasco which finally seems to be properly on the mend and I'm able to get around a lot easier although as you can see my tibia now looks like a meccano set.

What this whole palaver did give me though was time to sit and read some of the books that have been piling up and to explore some new music.  I've written about the books on the blog already but have neglected to mention some of the music so it's time to put things right.

So, with the usual disclaimer of them being in no particular order, here are some of the records that I enjoyed over the last 12 (but particularly 6) months.

Keith Seatman - A Rest Before the Walk
Keith mixes folk and electronics to sublime effect to create a natural and human hauntological narrative.
https://keithseatman.bandcamp.com/album/a-rest-before-the-walk

Howlround - Tales from the Black Tangle
Loops as darkly immersive as a dip in the Mariana Trench.
http://thefogsignals.com/album/tales-from-the-black-tangle

The Assembled Minds - Creaking Haze and Other Rave-Ghosts
A late addition to 2015 or an early one for 2016 as it's not actually out yet.  Matt Saunders' haunted rave is filled with half remembered techno dreams.
http://patternedair.com/assembled-minds/

Various - The Delaware Road
A comprehensive and diverse compilation based around a fictional radiophonic narrative.
https://buriedtreasure.bandcamp.com/album/the-delaware-road

Cat's Eyes - The Duke of Burgundy OST
A sumptuous soundtrack to the Peter Strickland film that owes a debt to Angelo Badalamenti's Twin Peaks recordings and that's no bad thing.
http://catseyes.store-08.com/the-duke-of-burgundy-presale/

Revbjelde - The Weeping Tree
Yet another appearance on this list from the Buried Treasure label this time from head honcho Alan Gubby's own band.  The EP is a bloody lovely collection of electronic folk featuring some fabulous guest vocals from Emma Churchley.
https://buriedtreasure.bandcamp.com/album/the-weeping-tree