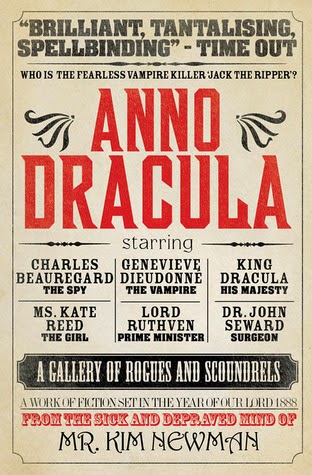 It is 1888 and Queen Victoria has remarried, taking as her new consort Vlad Tepes, the Wallachian Prince infamously known as Count Dracula. Peppered with familiar characters from Victorian history and fiction, the novel follows vampire Geneviève Dieudonné and Charles Beauregard of the Diogenes Club as they strive to solve the mystery of the Ripper murders.
Anno Dracula is a rich and panoramic tale, combining horror, politics, mystery and romance to create a unique and compelling alternate history. Acclaimed novelist Kim Newman explores the darkest depths of a reinvented Victorian London.
This brand-new edition of the bestselling novel contains unique bonus material, including a new afterword from Kim Newman, annotations, articles and alternate endings to the original novel.

Wow! Now that was a trip worth taking. Newman's reinvention of the Dracula mythos, indeed the whole vampire mythos, is a sumptuous and beautifully literate experience.

The basic conceit is simple. What if van Helsing and his followers had failed to stop the Count and he had fully implemented his plan to conquer and rule Britain? Here his marriage to Queen Victoria has brought all of the famous vampires out of hiding and has led to the adoption of vampirism by many within the country from politicians to beggars. Into this society comes the fear and outrage engendered by a spate of murders of vampire whores in Whitechapel by a killer christened first 'Silver Knife' and later, more famously (or infamously) 'Jack the Ripper'.

Newman makes no attempt to hide the identity of his ripper, it's one of the first things the book divulges and instead we are allowed to view, Columbo style, the slow advance of Charles Beauregard, agent of the Diogenes Club, as he investigates and eventually solves the crimes.

This is secondary however to the changes in both society and the individuals around Beauregard. The novel is bigger than a mere whodunnit. There is, in the great spirit of the Diogenes Club's most famous member (along with his brother and his author), a plan most devious, a plot most wonderful and a scheme most subtle that only the most indolent (no offense to Mr. Newman) could have conceived of it.

It's wonderfully written with subtle changes of pace and tone which carry you along as much as the plot. Newman's writing was only known to me through his articles in Empire and his excellent book on Apocalypse Movies so this was a real revelation and a joy from start to finish.