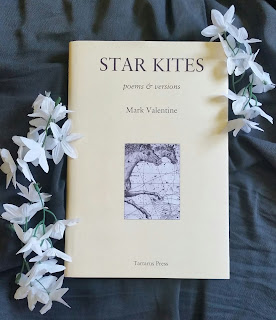 
Mark Valentine’s first collection of poems draws on the sources that have inspired his acclaimed short stories—oneiric and otherworldly, and inexplicably beautiful. The poems evoke half-lit figures and images, seen in smoke, shadow, sun-haze and stone, and moments when the visible world does not quite cohere. Valentine writes of spells, oracles, myths and the fragility of memory.


Also offered are versions of poems by previously unheard European voices, including the Italian twilight poet Sergio Corazzini; the early mystical work of Ernst Stadler, a young, cosmopolitan poet killed in the Great war near Ypres; an Imagist homage to the Armenian poet and reformer Madame Sibyl; and a poem of Autumn by Ludmila Jevsejeva, exiled for her work in Esperanto.


Mark Valentine’s poems have appeared in Smoke, Sepia, Amoeba, The Fool, Mandragora and other journals and anthologies.

In his first collection of poems Mark Valentine has continued to develop many of the themes and ideas found in both his fiction writing and his non.  His poems explore memory and place, the phantasmal, the fantastical and of the joys to be found in the mundane.  As ever his writing is a thing of delicate beauty in which you can feel the care and deliberation he has taken with each piece and the way his ideas have a subtle way of insinuating themselves into your thoughts, taking up residence and leaving you pondering them for some hours afterwards.

In the second half of the book Mark presents 'versions' of poems written by obscure European poets.  It's unclear (to me at least) whether these are translations, adaptations of the works or, as I suspect, a combination of both but they are an interesting and compelling assortment that show the love and commitment to the literature of the fantastical that we've come to expect from Mark.

This is a rather wonderful selection that, after the delights of his short stories in 'The Uncertainty of All Earthly Things' and the fascinating articles that made up 'A Country Still All Mystery', offers us another glimpse into the worlds of this most captivating of authors.