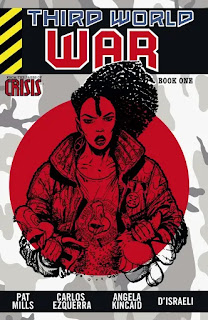 Eve is unemployed after leaving university and is immediately conscripted as a soldier working for a corporation and discovers just how South American countries are being exploited to create food needed to feed the increasing population for their profit under the guise of western paternalism.

When Crisis came out in the early 90s I jumped on it and loved it.  The leftist slant was right up my anarcho punk street and I devoured every issue.  I still have them here even though I sold off most of my collection long ago keeping only those books I couldn't bear to part with or thought I'd like to read again; this was partly the former but mostly the latter.  Over the course of it's life Crisis featured stories by the likes of Garth Ennis, Grant Morrison, Mark Millar, Al Davidson, Glenn Fabry, Rhian Hughes, Milo Manara, Steve Parkhouse, David Lloyd, Steve Yeowell and in the case of the book in question here, 2000AD legends Pat Mills and Carlos Ezquerra.

Now I always expected to reread this stretched out on the floor with a big, teetering pile of the (typical UK sized) comics next to me but miracle of miracles it's been reprinted and so I just had to grab a copy. 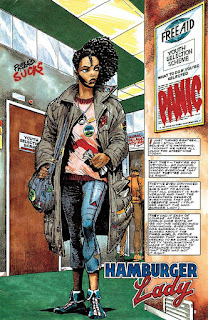 This first one is the story of the influence of multinationals on South America and the ravages it brings. It's an eye opening story but not necessarily a good one.  Mills' focus is almost entirely on the politics and everything else is secondary at best.  The characters are loosely sketched and very much stereotypes that serve to propel Mills' next polemic.  It's either going to annoy the hell out of you or you're going to agree with it and it'll depress / anger the hell out of you (delete as applicable).  It is though a vital and important read that remains sadly relevant that I'd urge anyone to read.

Now, I need to admit here that this first story arc of TWW is the one I wanted to reread the least.  As I mentioned earlier I was pretty politically minded when this was published and so the politics behind Mills' story here was something that I was already aware of and remembered both the story and issues pretty vividly.  What I really want to read again comes next once Eve and Paul are back in the UK and we get the New Azania and the Green Army storylines and so to an extent I bought this one to support it and encourage Revolution to print the next arc which if memory serves are particularly apposite for the world we live in now.

If you enjoy what we do here on Wyrd Britain and would like to help us continue then we would very much welcome a donation towards keeping the blog going - paypal.me/wyrdbritain
Posted by ian holloway at 20:05