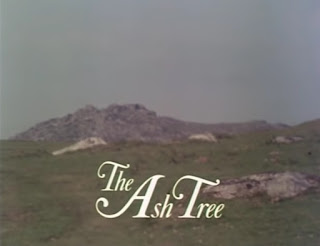 'The Ash Tree' was the fifth and final (for three decades) M.R. James adaptation made for the BBC's annual 'A Ghost Story for Christmas' strand.  Like its predecessors (and two of its immediate successors) it was directed by Lawrence Gordon Clark who here is joined by the writer David Rudkin fresh from scripting 'Penda's Fen' the previous year.

In James' original story - published as part of his 'Ghost Stories of an Antiquary' in 1904 - Sir Matthew Fell is responsible for local woman Mrs Mothersole being hanged as a witch, having seen her cutting branches from the Ash tree outside his bedroom window, but not before she lays a curse on him saying "There will be guests at the Hall" which, as curses go, on the surface doesn't seem that bad.  Unsurprisingly Sir Mathew soon reaches his grisly end and the story switches to his grandson, Sir Richard, who soon finds himself in a similar sort of pickle as his gramps.

Rudkin's 'television version' makes a few cosmetic changes to the tale - uncle and nephew instead of grandfather and grandson and implying an additional rationale behind the witchcraft accusation - but essentially stays true to the core of the story.  He does though do what he does best and gives the whole thing a distinctly eerie and artful construction that bestows a dream-like quality as Sir Richard almost timeslips between his own time and Sir Matthews - both are played by Edward Petheridge - and experiences the events that lead up to both their grisly ends first hand at the fangs of creatures that seem conjured up from an early David Lynch fever dream.

If you enjoy what we do here on Wyrd Britain and would like to help us continue then we would very much welcome a donation towards keeping the blog going - paypal.me/wyrdbritain
Posted by ian holloway at 12:25