The Trappist & The Hare 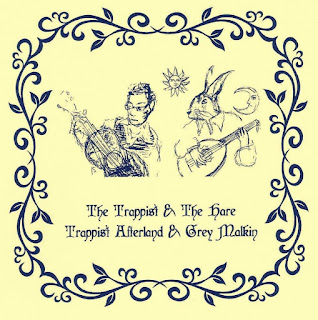 
I've been in contact with the enigmatic human / hare hybrid known only (even to his mum) as Grey Malkin for a few years now connected by a shared love of all that is weird and wonderful in film and music. He will perhaps be best known to Wyrd Britain readers under his now retired musical identity as 'The Hare and The Moon' as who he produced a stream of music channelling both the cream of the stranger end of the 1960s and 70s Acid Folk scene, the magickal masters of the UK Post industrial scene such as Coil and Current 93 and the pastoral menace of the type of TV shows and movies we regularly feature on Wyrd Britain. He's one of a select few I've invited to contribute to the blog - providing both a mixtape and a '3 Wyrd Things' - but shamefully this is the first time I've reviewed any of his music.

Here he's partnered up with Australian musician Adam Geoffrey Cole -who records under the name Trappist Afterland - who here provides vocals along with what seems to be primarily acoustic instruments whilst Grey is focused more (but not exclusively) on the electric and across the 11 tracks there are 7 more guest musicians providing additional vocals, bass, guitar and drums.

Musically we are hovering around the realms of Grey's previous releases but built around a slightly more song orientated core which adds an interesting new dimension to the compositions.  I'm not the world's biggest folk song fan and it's usually the vocals that turn me off but here I find myself very pleasantly surprised with Cole's vocals reminding me strongly of his countryman Trash McSweeney, the singer with The Red Paintings, particularly on the tracks 'An Error This Time', 'Full Snow Moon' and 'Full Crow Moon (Scarecrow Song)'.

The album on the whole though is gently cinematic, redolent of scenes of wood fires reflecting against dark shadowy trees, of disembodied footfalls on dry twigs, of caught breaths and of frozen moments and it's really rather wonderful.

If you enjoy what we do here on Wyrd Britain and would like to help us continue then we would very much welcome a donation towards keeping the blog going - paypal.me/wyrdbritain
Posted by ian holloway at 20:09

Email ThisBlogThis!Share to TwitterShare to FacebookShare to Pinterest
Labels: Grey Malkin, music, The Trappist & The Hare