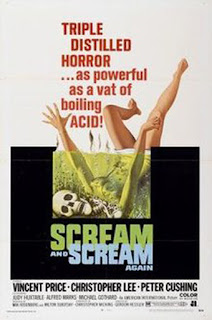 'Scream and Scream Again' was the first time the three titans of horror movies, Peter Cushing, Christopher Lee and Vincent Price, appeared in the same movie together which as you can tell from the movie poster was a big deal with the three sharing top billing.  Unfortunately Cushing is only in it for about 5 minutes and never shares a scene with the other two who also only meet for a single, brief scene at the very end and are both little more than supporting cast in the rest of the movie.

Made by Gordon Hexler for Amicus Productions, his second film in a row to feature both Lee and Price (after 'The Oblong Box'), and based on the novel 'The Disorientated Man' by the pseudonymous Peter Saxon it's a strange sort of movie all round being built around three narrative strands that, to varying degrees, feel entirely unconnected until they all come together in the finale. 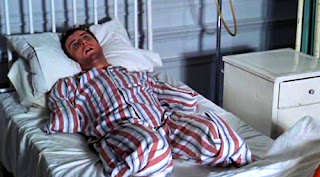 The first strand features a jogger trapped in a hospital bed and cared for by an uncommunicative nurse (Uta Levka) who keeps waking up to find another limb has been removed.  The second strand concerns an un-named Eastern European military junta where various high ranking officials are being 'spocked' to death with some sort of vulcan neck pinch and the third, and main, storyline tells of the police investigation into a series of violent, vampiric murders of young women picked up in a London hippie club. 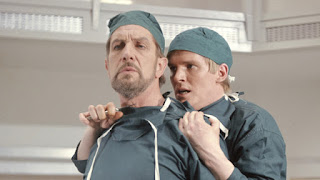 I like this film a lot but truthfully they could have easily ditched the entire Eastern European storyline and made more of the other two for a far more cohesive film.  As I said Cushing makes no more than a cameo appearance and Lee's combined scenes don't add up to much more.  Price is as reliable as ever but the film really belongs to Michael Gothard as Keith the vampire and Alfred Marks as the sardonic Detective Superintendent Bellaver, the copper hunting him down.  It has it's flaws for sure but it tried to do something a bit different to the norm for which I'll always give it kudos and whilst it doesn't entirely succeed it certainly makes for an entertaining watch.