The Ghosts and Scholars Book of Mazes 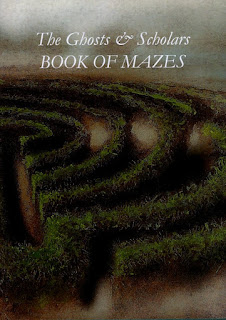 M.R. James’s 1911 tale, “Mr Humphreys and His Inheritance”, is one of the most famous maze short stories, if not the most famous.
Editor Rosemary Pardoe has chosen eight supernatural maze stories to reprint, all of them taken from small press journals and books, and some of them never previously reprinted.
The mazes range from unicursal turf through puzzle hedge to modern crop examples; one tale is a prequel to “Mr Humphreys and His Inheritance”.
The second part of this volume consists of six brand new stories which range even more widely, from a Roman mosaic maze to a mirror maze at the top of a high-rise office block.
All of the stories have a folklore, folk custom and/or antiquarian background.
So, fourteen supernatural maze stories by some fabulous authors of folk horror and ghostly, ghastly, spooky tales of terror.

Selected and introduced by former Ghosts and Scholars head honcho Rosemary Pardoe this collection of ghostly and weird tales all share the theme of mazes (and labyrinths).

As demonstrated by M.R. James - the author whose work Ghosts and Scholars celebrates - in his story 'Mr Humphrey's Inheritance' mazes are a powerful object that hides, that confuses, that entices and entraps.  The stories in this collection all embrace these ideas to various extents.

Now I have small issue with themed collections, I'll get half way through and get a bit bored with the theme.   It doesn't matter how good the book is I just find them a tad repetitive and one dimensional which is what happened herd and the book ended up taking a few weeks to read.

Opening strongly with Mark Valentine's gentle and quiet love story 'As Blank as the Days Yet to Be' - which was the only story here I already knew having it in his Zagava collection from the other year and in booklet form - after which the book meanders slightly with some strong tales by John Howard, Michael Chislett, Rick Kennett, Cable Tyrell, John Reppion and Reggie Oliver, a few that were entertaining in their way and a couple of real stinkers (which I shan't identify).