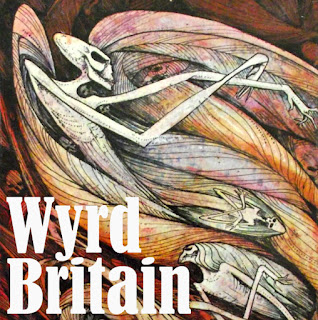 It's been a long time since I've made one of these but today I got the urge again.  A few years ago I made a run of mixes featuring a blend of old favourites and new friends and thought it was about time I made a new one.

'Possessors of the Orb' is taken from the eagerly awaited new Teleplasmiste album, 'To Kiss Earth Goodbye' released in early June on House of Mythology.  Band member Mark Pilkington recently contributed to our regular '3 Wyrd Things' slot which you can find here.

Embertides' is a collaboration between David Colohan of United Bible Studies and Grey Malkin (formerly) of The Hare and the Moon the pairing here making music of a deliciously darker hue than I'd previously heard from either before.

The great Paddy Kingsland I'm sure needs little introduction to readers of this blog and his composition here - 'Brighton Pier' - comes from 'The Hitch-Hikers Guide to the Galaxy' which needs even less of one.

Heavy Water is another in a long line of pseudonyms adopted by Pk Chown the artist occasionally known as all of Action Catalyst and of Julius Vanderbilt, as half of James Beige and as an indeterminate amount of The Dandelion Set.  This album and more can be found at Fine Tune Recordings.

Grey Malkin (who has also done a '3 Wyrd Things' for us) has been on a roll of late and this, his most recent release, finds him in collaboration with Australian folk musician Adam Geoffrey Cole or Trappist Afterland as he's known to his mum.  The album is available from either chaps Bandcamp pages.

Revbjelde are old friends of Wyrd Britain and this is the title track of their most recent album on Buried Treasure.  Watch out for Revbjelde and Buried Treasure's head honcho Alan Gubby's '3 Wyrd Things' in early June.

Closing the mix is Carmarthen based Susan Matthews heard here alongside her son Roan on guitar.  Susan has been making amazing music for years both solo and alongside such folk as Tony Wakeford, The Dead Mauriacs and me.  This song, taken from the album 'The Self -Harm Handbook', and many more can be found on her Siren Wire label page.

If you enjoy what we do here on Wyrd Britain and would like to help us continue then we would very much appreciate a donation towards keeping the blog going - paypal.me/wyrdbritain
Posted by ian holloway at 18:01