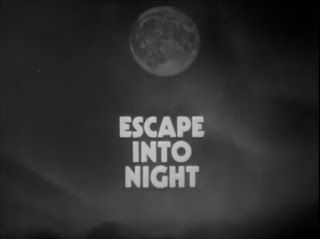 Based on the novel 'Marianne Dreams' by Catherine Storr originally published in 1958 this 1972 drama from ATV tells the story of a petulant little shit called 'Marianne' (Vikki Chambers) who, whilst bedridden recovering from the broken leg she gets falling from her pony, begins to dream of the spooky house she's drawn in her sketchbook.  In the house she meets a young boy named Mark (Steven Jones) who is unable to walk.  Following an argument with Mark, in a fit of pique, Marianne foolishly surrounds the house with drawings of standing stones complete with eyes to watch and trap Mark inside after which it becomes a race against time to escape from the encroaching 'Watchers'. 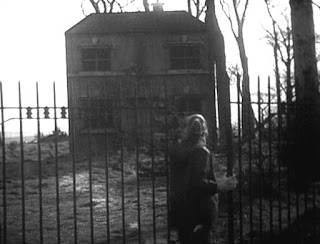 'Escape Into Night' was adapted for TV by the great Ruth Boswell who had previously developed the fabulous 'Timeslip' and who would later go on to develop 'The Tomorrow People'.  Just like 'Timeslip' 'Escape Into Night' was originally filmed and shown in colour but those tapes have been lost / wiped and only the telerecordings exist but personally I think that not entirely a bad thing as the dark, grainy and almost washed out nature of the telerecordings gives Marianne's dreamworld a particularly sinister ambience that I can't really imagine in colour.

The acting of the two leads is very much of the middle class drama school variety typical of the era but beyond that everything about 'Escape Into Night' seemed designed to terrify it's young audience from the watching stones to the unrelenting build of tension over the 6 episodes, the Ralph Vaughan Williams titles to the massively creepy hummed end credits over the morphing childlike drawings of the cast and 48 years on its lost little of its creepiness.

Buy it here - Escape into Night - The Complete Series

If you enjoy what we do here on Wyrd Britain and would like to help us continue then we would very much appreciate a donation towards keeping the blog going - paypal.me/wyrdbritain
Posted by ian holloway at 11:59