The Lark Ascending: People, Music and Landscape in Twentieth-Century Britain 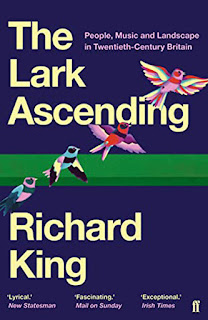 Over the course of the twentieth century, The Lark Ascending by Ralph Vaughan Williams is the piece of music that has come to define the mythical concept of the English countryside, with its babbling brooks and skylarks. Yet, the landscape is not really an unaffected utopia, but a living, working and occasionally rancorous environment that has forged a nation's musical personality. On a journey that takes us from post-war poets and artists to the free party scene embraced by the acid house and travelling communities, Richard King explores how Britain's history and identity have been shaped by the mysterious relationship between music and nature.

Taking as its starting point Ralph Vaughan Williams' 1920 composition from which the book takes its name King has undertaken an exploration of the changing face of the British countryside through the 20th century and of the individuals and musicians that have been inspired by it.

Taking a sedate journey across the century we are introduced to a wide variety of both the savoury and unsavoury characters who have found solace and identity in nature; from those escaping the horrors of the battlefields of WWI to the blood and country ugly politics of the inter war years which mixed communing with nature with a nationalist ideology and folk music / dance that still pollutes much of the outside edges of folk music and on to 'back to basics' pioneers like John Seymour who's West Wales small holding along with the books and programmes he made through the 60s and 70s championed the cause into a movement so parodied in shows like 'The Good Life'.  Beyond this King provides a keen, if brief, overview into pivotal events such as the Greenham Common Women's Peace Camp, the Peace Convoy, the free festivals and the early rave scene and of the various legislations introduced to curtail all these activities.

). Further on we skirt around Hawkwind and The Penguin Cafe Orchestra and composer Gavin Bryars before settling on the hauntologically lysergic sounds of Boards of Canada whose music often feels like an oneiric time capsule of days gone bye.

It's a fascinating read.  Personally I'd have liked to hear much more of the voices of the actual musicians and their views on how the landscape had influenced their work but in their absence King provides a coolly authorial analysis.  Unusually for what is a fairly short book King takes a rambling approach and makes a number of leaps of logic - those who raised an eyebrow at the mention of Penguin Cafe back there in a book about the links between music and landscape I can assure you I did the same - and the finished article is too idiosyncratic to provide the definitive word on the topic but this is a subject I hold dear and one that fuels my own music so I eagerly devoured the book and generally wasn't disappointed with what proved to be a timely and interesting read.

Buy it here - The Lark Ascending: People, Music and Landscape in Twentieth-Century Britain

If you enjoy what we do here on Wyrd Britain and would like to help us continue then we would very much appreciate a donation towards keeping the blog going - paypal.me/wyrdbritain
Posted by ian holloway at 12:07