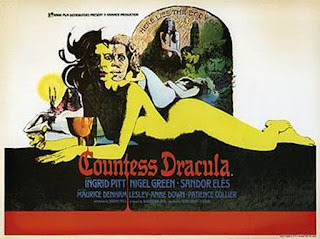 Loosely based on the life and crimes of Hungarian noblewoman Elizabeth Báthory who was tried and convicted of multiple murders in the 1700s and whose subsequent legend includes tales of her bathing in blood in the belief that she could retain her youth this late period Hammer movie was one of the last of the period gothic chillers Hammer was to produce.

Whilst retaining a modicum of the dark magic tropes of old, Countess Dracula is very much a shift away from the big bad creatures of the good old days and at its heart is a woman; a vain, psychopathic and profoundly broken woman but just a woman and this is very much a tale of the seductiveness of youth and the cruelty of vanity. 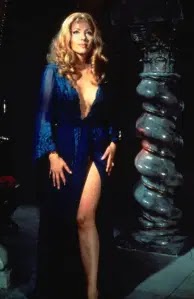 Dominating the movie is the wonderful Ingrid Pitt utterly dominating the screen, by turns a seething, violent harridan and a seductive, lethal beauty drunk on her newfound vitality, obviously relishing her second lead role in two years following 1970s 'Vampire Lovers' for the same company.  She is ably supported in this by Nigel Green as her spurned lover Captain Dobi and the great Maurice Denham as the librarian Grand Master Fabio although Sandor Eles makes for an ineffectual male lead lacking both the chops and the presence.

For a film about a serial murderer bathing in the blood of virgins it is a remarkably bloodless affair with director Peter Sasdy choosing to focus on slowly escalating the horror that Bathory's addiction to the youth her actions bring over Pitt's desire for more gore. Watching now it seems to me that both were correct and it's a bit of a shame that a compromise wasn't reached but as noted earlier the finished article is a different sort of movie to what had gone before and it mostly eschews the action and the histrionics for a much quieter movie but that certainly doesn't detract from what was to be one of the final flourishes of the studios golden years.

If you enjoy what we do here on Wyrd Britain and would like to help us continue then we would very much appreciate a donation towards keeping the blog going - paypal.me/wyrdbritain
Posted by ian holloway at 11:40