The Cosy Room and other stories 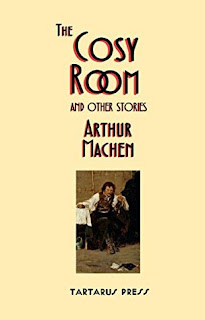 The Cosy Room and Other Stories is a collection of Arthur Machen’s short stories curated by John Gawsworth (aka Fytton Armstrong) in 1936. As well as exhuming some very early tales published in the first half of the 1890s, Gawsworth included Machen’s decadent prose poems from Ornaments in Jade, and later work commissioned by Lady Cynthia Asquith for collec¬tions such as The Ghost Book (1926) and Shudders (1929).

This collection from Machen runs the gamut of his entire literary career featuring stories dating from his 1890s heyday through to his late period masterpiece 'N'.  The collection was originally assembled by Machen's would be biographer John Gawsworth (real name Terrance Fytton Armstrong) for publication in 1936.  Gawsworth was a noted champion of writers such as Machen and M.P. Shiel (and possibly an exploiter of) and it has to be said that here he has assembled an intriguing pot pouri of tales.

It certainly isn't all gold, there are a couple of real duffers in there - 'A New Christmas Carol is particularly woeful - but equally he's included some gems, 'Opening the Door' remains a favourite as does 'Midsummer' and, of course, we have the undisputed gem of Machen's later years, 'N'.

This isn't a Machen collection for the newcomer.  It's too fast and too fleeting to be a definitive introduction (for that I'd direct your attention here) and too scattershot to find the soul of the man.  It does though give an insight into the breadth of his writing and the many roads his imagination travelled.

Available from the publisher via the link at the top of the page.

If you enjoy what we do here on Wyrd Britain and would like to help us continue then we would very much welcome a donation towards keeping the blog going - paypal.me/wyrdbritain
Posted by ian holloway at 16:58