Gloriana, or The Unfulfill'd Queen 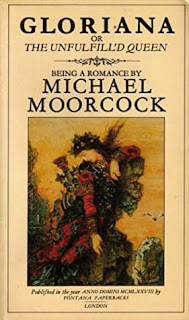 A fable satirizing Spenser's "The Fairie Queen" and reflecting the real life of Elizabeth I, tells of a woman who ascends to the throne upon the death of her debauched and corrupted father, King Hern. Gloriana's reign brings the Empire of Albion into a Golden Age, but her oppressive responsibilities choke her, prohibiting any form of sexual satisfaction, no matter what fetish she tries. Her problem is in fact symbolic of the hypocrisy of her entire court. While her life is meant to mirror that of her nation - an image of purity, virtue, enlightenment and prosperity - the truth is that her peaceful empire is kept secure by her wicked chancellor Monfallcon and his corrupt network of spies and murderers, the most sinister of whom is Captain Quire, who is commissioned to seduce Gloriana and thus bring down Albion and the entire empire.

With a noted debt to both Mervyn Peake's 'Gormenghast' and Edmund Spenser's 'The Faerie Queene', 'Gloriana' is Moorcock's reinvention of the reign of Elizabeth I relocated a hundred or so years later. 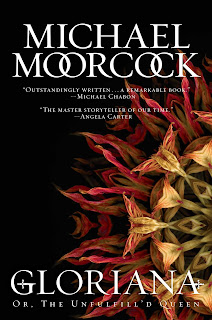 The setting of the novel is in the massive palace, the seat of governance for Albion's globe spanning empire.  Within its confines Gloriana rules by day and seeks relief from her sexual frustration by night.  The land is at peace and the Queen is beloved by the populace following depredations of the despotic reign of her father.  Working to keep this newly peaceful empire safe is her loyal chancellor Montfallcon and through him his most talented agent, the sociopathic Captain Quire.  It is when, at a moment of pique, Quire takes a new master and from his nest literally within the walls of the palace plots the ruin of Albion's peace.

Many of the cast of the novel have their origin in real life personages such as John Dee but beyond a few references to interdimensional travel - which aren't taken seriously by most of the cast - and the Queen's best friend the 'Countess Una of Scaith' sharing her name with Moorcock's recurring character, the temporal adventurer Una Persson - and they may in fact be one and the same - there's little obvious connection between this story and his wider multiverse.

Following a bit of a sluggish slog of a start I came to thoroughly enjoy this.  As much fun as the shorter fantastical tales of Elric and the like are, for me, Moorcock comes into his own when he allows himself a larger canvas (and page count). The scope of his story here is global even whilst it remains almost entirely within the confines of the palace and the intricacies of Quire's 'art' are slowly revealed.  The ending to the scheme when it arrives is sudden and jarring although in the older edition that I read the final scene between Quire and Gloriana is horrendously unpleasant and I'm intensely pleased that it was excised and rewritten for subsequent editions as it really did marr what had been up to then a glorious romp of a book.