Blood of the Vampire 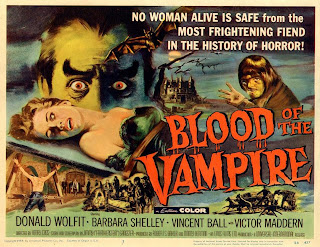 In 1958 with a couple of successful films under his belt legendary Hammer scriptwriter Jimmy Sangster was hired by Tempean Films (later to be the home of 'The Saint' TV series) to work his magic for them.

) in 1958.  For Tempean he was to reuse much of the gothic trappings that had served him so well on his previous two films but with an added twist of a slightly more modern take on the vampire myth that again took inspiration from both the movies he'd written immediately prior. 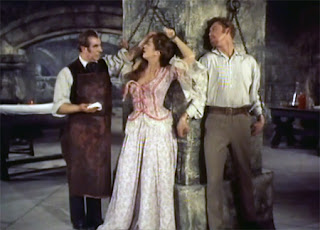 Carlstadt, 1880, disgraced doctor John Pierre (Vincent Ball) is convicted of murder and sent to a prison for the criminally insane run by Dr Callistratus (Donald Wolfit) and aided by his deformed assistant Carl (Victor Maddern) where he is quickly co-opted into helping with his captor's sanguinary experiments.  Meanwhile, on the outside, Pierre's fiancée Madeleine (Barbara Shelley - 'Quatermass and the Pit' (UK

)) is determined to prove his innocence.

Kudos must be given to Sangster for trying something a little different here but the movie isn't a great success.  It's a pretty sluggish watch and director Henry Cass struggles to inject much life into the proceedings.  Neither of the two leads have the charisma to carry the plot and the always reliable Shelley isn't given anywhere near enough to do.  The stand out here is Maddern labouring under heavy make-up his performance is subtle, menacing and ultimately sympathetic all without ever uttering a single word.

If you enjoy what we do here on Wyrd Britain and would like to help us continue then we would very much welcome a donation towards keeping the blog going - paypal.me/wyrdbritain
Posted by ian holloway at 11:39

Email ThisBlogThis!Share to TwitterShare to FacebookShare to Pinterest
Labels: Blood of the Vampire, horror movie