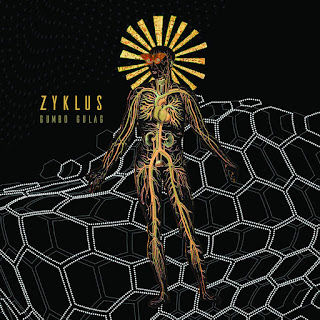 Zyklus is one of a number of nom de plumes adopted by Buried Treasure's head honcho Alan Gubby perhaps better known to Wyrd Britain readers as the person behind one of our favourites, Revbjelde.

This newest release is a lockdown compilation of some of Alan's older recordings, a collection of various tunes and tinkerings from the early 1980s through to the early 2000s.  The music here is considerably more synth led (dominated) than his more recent projects with a more overtly industrial vibe of the Cabaret Voltaire, early Coil and the harder edged synth pop varieties rather than the Throbbing Gristle soundscapes or Einsturzende Neubauten scrap iron clattery.  Equally I picked up a library music vibe and at various points of listening I could imagine this gracing the soundtrack of a dystopian early 90s cyberpunk movie and at others you can hear the influence of Alan's beloved BBC Radiophonic Workshop as the music offers a hazy glimpse of a futuristic technopolis of neon signs and milk bars.

I've a fair bit of Alan's music in my collection both from his Buried Treasure label and his previous Nanny Tango label and this one came as a real - and very pleasant - surprise.  My listening tastes are pretty eclectic now but I grew up listening to grindcore, anarcho punk and industrial so a darker edge is always welcome and it's definitely here. With the exception of Coil, who are never far from my CD player, I haven't really taken a stroll down these particular streets for a good long while and it was great fun to do so.