The Children of the Pool and Other Stories 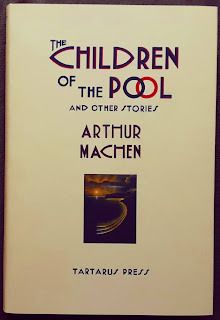 
In his room in Gray’s Inn, London, at the end of the nineteenth century Arthur Machen had one of the most memorable mystical experiences of his life: ‘the wall trembled and the pictures on the wall shook and shivered before my eyes, as if a sudden wind had blown into the room.’ For days afterwards he went about in ‘a rapture of delight’. This encounter with another order of things reinforced his conviction that there is a world beyond the one where we usually walk.
The six stories in The Children of the Pool, reflect in their different ways this lifelong belief. The bookish recluse in ‘The Exalted Omega’, the kabbalistic artist in ‘Out of the Picture’, the holiday¬makers in a Welsh resort in ‘Change’, all encounter the truly uncanny, and cannot emerge unchanged. And in the other three stories Machen explores the edges of that unknown terrain, the human mind.


'The Children of the Pool' was (I think) the final work of Arthur Machen's long writing career.  It's a collection of 6 stories that all touch on the various preoccupations of his work that followed him through the years with the possible exception of 'The Tree of Life'.

'The Exalted Omega' that opens the book is the story of a lost and dispirited man who in his lonely digs (Machen's own) begins to hear voices and see flashes of light that offer tantalising glimpses into what appears to be the planning of a murder.  In the middle of this we are treated to a short diversion into the world of spiritualism.

The title piece is much anthologised and is an odd piece that like much of Machen's work tells of a thin place between the worlds that Machen spends much of the story explaining away.  I like these sort of stories, my habit is always to lean towards the supernatural explanations but I like the over earnest defences for rationality he makes.

'The Bright Boy' is a much more straight forward tale, if you can call a tale about the crimes of a morally repellent, seemingly unaging man with the physical appearance of a 7 year old boy (like an evil Gary Coleman) hiding in plain sight with his fake parents straightforward.  It's a story I've read before, and one I didn't think much of then or now.

The aforementioned 'Tree of Life' is a real anomaly as it's ostensibly the story of a bedridden land owner dictating the use of his land to his estate manager that has a rather lovely twist in the tail.

'Out of the Picture' is one I'm surprised I've not seen before.  It harks back to Machen's early love of Robert Louis Stevenson with a tale redolent of Jekyll and Hyde that I enjoyed it very much and, as I said, am surprised it's not been more widely anthologised.

The book ends with another hark back in the story 'Change' where we are witness to a tale of child abduction a la  'The Shining Pyramid' but with a more folkoric changeling twist to it.

It's a solid and engaging collection from a writer who knew his glory days were behind him but was still willing to put pen to paper and try to find a new angle and a new tale and it's always a joy to read that.

If you enjoy what we do here on Wyrd Britain and would like to help us continue then we would very much welcome a donation towards keeping the blog going - paypal.me/wyrdbritain
Posted by ian holloway at 19:55

Email ThisBlogThis!Share to TwitterShare to FacebookShare to Pinterest
Labels: Arthur Machen, book review, Tartarus Press, The Children of the Pool and Other Stories