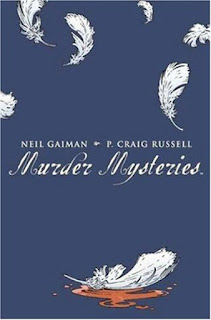 A lonely man in Los Angeles is told a unique tale - a passion play that sheds light on the events before the creation of the world! Constructing the Universe is a vast task - and up in Heaven, God has allocated roles to all of his angels, even if the roles of some are more ineffable than others. But when a murder takes place - the first murder - an archangel is assigned to investigate...Teaming a story created by comics legend Neil Gaiman (The Sandman, Miracleman, Harlequin Valentine) with an adaptation by acclaimed, multi-award winning artist P. Craig Russell (The Sandman, The Ring of the Nibelung), this is guaranteed to become an instant classic!

I first read this story years ago as a prose piece on one of Gaiman's collections and at the time it very much appealled to my inner goth who loves a tale of angelic violence and retribution.  This version is a graphic novel with the story illustrated by artist P. Craig Russell who has worked with the writer a few times over the years as well as with folks like Michael Moorcock (on Elric) alongside adapting older works by Oscar Wilde (Salome) and various operas. 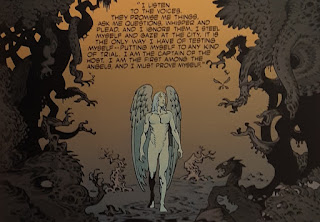 The story here tells of the first murder and of it's investigation by Raguel, the vengeance of the Lord.  The majority of the book is set in Heaven so Russell gets to let his lovely art nouveau-esque style fly as he draws angels soaring on majestic wings amidst gleaming spires.  Outside of Raguel's tale there is a framing device set in LA that walks an almost perfect line between the sort of 70s and 80s LA serial killer vibe so beloved of movies and a Chinatown / The Long Goodbye neo-noir that is helped no end by Gaiman's outsider commentary.

It's a cool quick story with an interesting twist - several actually - on the usual.  I'm a fan of Gaiman's short stories and Russell is always worth a look.  His isn't the type of comic art I generally seek out - I prefer the more idiosyncratic art of folks like Kevin O'Neill, Eddie Campbell or Ted McKeever - but that doesn't mean I don't thoroughly enjoy it when I find it and it makes for as perfect a match here with Gaiman's words as it did years ago with Moorcock's.

If you enjoy what we do here on Wyrd Britain and would like to help us continue then we would very much welcome a donation towards keeping the blog going - paypal.me/wyrdbritain
Posted by ian holloway at 18:46