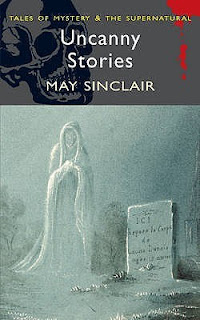 May Sinclair was an innovator of modern fiction, a late Victorian who was also a precursor to Virginia Woolf. In her Uncanny Stories (1923), Sinclair combines the traditional ghost story with the discoveries of Freud and Einstein. The stories shock, enthral, delight and unsettle.
Two lovers are doomed to repeat their empty affair for the rest of eternity... A female telepath is forced to face the consequences of her actions... The victim of a violent murder has the last laugh on his assailant... An amateur philosopher discovers that there is more to Heaven than meets the eye.
Specially included in this volume is The Intercessor (1911), Sinclair's powerful story of childhood and abandoned love, a tale whose intensity compares with that of the Brontës.

I first came across May Sinclair a few months back in the 'Mortal Echoes' anthology from The British Library which featured her story 'Where Their Fire Is Not Quenched' a truly terrifying tales of a very personal Hell.  Not long after that I watched the TV adaptation of her 'Intercessor' which was a rather beautiful ghost story about loss, blame and guilt.  I was already hooked after the former and by the end of the second I was besotted.  As it happened sat unread on a shelf here I had this collection of her work so I happily waded in.

Following what seems to have been a fairly difficult childhood and a problematic relationship[ with her mother, Sinclair took to writing to support them at a time when she was also becoming an active supporter of the women's suffrage movement.  All these factors have a presence in her stories where independent and sexually liberated women find themselves at the mercy of oppressive control either from family, tradition or religion.

Those two previously mentioned stories bookend this collection and do so in a manner that shows the extremes of her tales; the cruel, inescapable brutality of the former and the poignant delicacy of the latter joined by the quality of the prose.

Between the two reside various shades of fear with the standout moment being the psychic shenanigans of 'The Flaw in the Crystal' that, with it's lead character of a confident and sexually liberated young woman is a real breath of fresh air although that's not to belittle any of the remaining five stories.  Admittedly some, like 'The Token' are a little slight but they don't hang around and make for nifty quick reads between the more developed tales.

Sinclair's supernatural output was small but substantial and it's a shame that she isn't better regarded as stories like 'Where Their Fire Is Not Quenched' have a timeless quality that still resonates.

If you enjoy what we do here on Wyrd Britain and would like to help us continue then we would very much welcome a donation towards keeping the blog going - paypal.me/wyrdbritain
Posted by ian holloway at 18:33