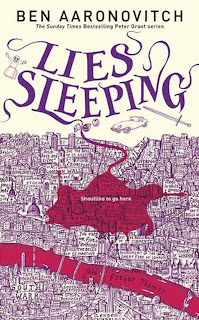 Join Peter Grant, detective and apprentice wizard, for a brand new case . . .
Martin Chorley, aka the Faceless Man, wanted for multiple counts of murder, fraud, and crimes against humanity, has been unmasked and is on the run. Peter Grant, Detective Constable and apprentice wizard, now plays a key role in an unprecedented joint operation to bring Chorley to justice.
But even as the unwieldy might of the Metropolitan Police bears down on its foe, Peter uncovers clues that Chorley, far from being finished, is executing the final stages of a long term plan. A plan that has its roots in London’s two thousand bloody years of history, and could literally bring the city to its knees.
To save his beloved city Peter’s going to need help from his former best friend and colleague–Lesley May–who brutally betrayed him and everything he thought she believed in. And, far worse, he might even have to come to terms with the malevolent supernatural killer and agent of chaos known as Mr Punch.

Last time out we finally got to know the identity of the Faceless Man as the web of deceit he had woven around his true identity came crashing down in the most brutal way. Now he's on the run and the residents of The Folly and the rest of the forces of the Fuzz are hot on his trail.

Along the way Peter gets to spend some time with the Thames clan, the Folly gets some unexpected new recruits and there's an unexpected, and rather lovely, reunion before everything that's been building over the rest of the series comes rushing to a head.

Now, I really hope there's more here than we've seen so far as as a climax to a 7 novel (plus assorted comics and novellas) it's a tad underwhelming.  It's lively and readable and filled with warmth and humour as is always the case with Aaronovitch but just a tad anticlimactic.  Hopefully though he has something up his sleeve and as ever I'm eagerly awaiting the next instalment.

If you enjoy what we do here on Wyrd Britain and would like to help us continue then we would very much welcome a donation towards keeping the blog going - paypal.me/wyrdbritain
Posted by ian holloway at 19:55