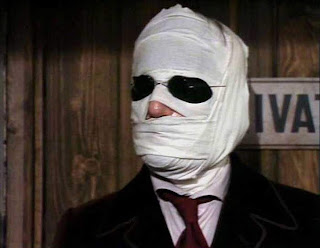 When scientist Griffin (Pip Donaghy) develops a process to turn himself invisible he soon degenerates from his already fragile mental state into complete delusional mania terrorising people and declaring it the beginning of the reign of the Invisible Man.

Made by the BBC in 1984 as one of it's Classic Serials this adaptation of H.G. Wells' 'The Invisible Man' was deemed too violent by the Beeb's hierarchy and, well, too boring by viewers and so has to a great extent slipped into obscurity.  By modern standards of course it isn't particularly violent but it is, a little, slow and could certainly have benefited from some pruning down to maybe four episodes instead of six. Typically BBC budgetary constraints are in evidence throughout with all the more well known cast members appearing only in the earlier episodes and there is some woeful overacting on display particularly when Griffin is meant to be up to shenanigans and the cast are, of course, having to react to and fight against nothing but in the more sedate sections the invisibility effects are reasonably well done and personally I always get a kick out seeing the headless dressing gown walking around.

Produced by former Doctor Who director and producer Barry Letts (the man who brought us the Roger Delgado Master) it is a fairly faithful adaptation (by James Andrew Hall) and that's perhaps part of the problem as what works for text doesn't necessarily translate to the screen. It is though nice to see a respectful adaptation that doesn't send the story off down some rabbit hole of the script writer's choosing - yes I'm looking at you Day of the Triffids.

If you enjoy what we do here on Wyrd Britain and would like to help us continue then we would very much appreciate a donation towards keeping the blog going - paypal.me/wyrdbritain
Posted by ian holloway at 12:34