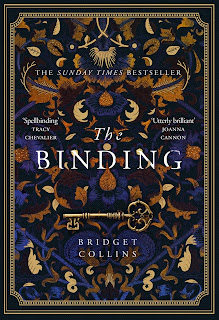 In the world of 'The Binding' Bridget Collins has created a world of secrets; secrets shared and secrets forgotten.  In this world, even more than our own, books have power and their contents are the truths that it's inhabitants wish to hide from themselves.

Emmett Farmer is a young (nominative determinism in action) farmer who upon recovering from a mysterious illness is summoned to become an apprentice bookbinder, one of a rare breed of people responsible for the creation of books and an occupation held in superstitious awe and more than a little dread.  Upon embarking on this new and unexpected path Emmett soon finds out that there may be more  to his life than he can recall.

Told over three acts 'The Binding' is indeed very much a book of three parts.  The opening section where Collins is building her world is a joy.  The central conceit is a novel one and she takes her time in embedding Emmett into the world of the binder before bringing this world crashing down around his ears.

The second act is the least successful and drags terribly in parts as secrets are revealed and the book becomes bogged down in some very tedious teen romance.  Thankfully Collins gets the book back on track in the concluding act with a shift of focus and a mostly satisfying denouement.

As befits a book about books this is, physically, a thing of almost fetishistic beauty that came to my attention almost entirely due to it's eye catching design but happily the contents, mostly, lived up to it with a story that wore it's unusual premise well.

If you enjoy what we do here on Wyrd Britain and would like to help us continue then we would very much appreciate a donation towards keeping the blog going - paypal.me/wyrdbritain
Posted by ian holloway at 17:54