Waiting for the End of the World 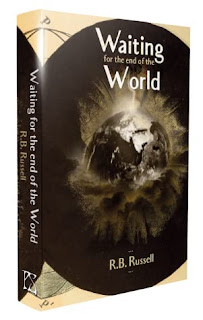 R.B. Russell
PS PublishingElliot Barton is haunted by a tragic mistake. At the time it seemed like the end of his world, but somehow he has managed to rebuild his life, and now lives happily with his partner, Lana, in their house on Sapphire Street. But Elliot’s good fortune threatens to implode when his old school friend, Vincent, reappears. He has become a Christian, and wants to tell the authorities what happened so many years before. Rather than simply following the teachings of Christ, however, Vincent also claims to have met him. Elliot becomes involved with Vincent’s millennialist church, which prophesied that the world would end in the year 2000. But what happens to the Messiah and his church when that prophesy does not come to pass? And can Elliot navigate his way through the chaos of incredible experiences back to his happy existence on Sapphire Street?

Elliot has two things; an almost perfect life and a secret, a secret that he's carried with him like a cross and which is about to come back and burst the bubble of his contentment.

From their home in 1 Sapphire Street, Saltburn Elliot and Lana live a life of comfortable routine, Lana has her ghosts and Elliot has the secret that fills his nights with dreams but by mutual agreement neither pries into the others corners.  At least that is until Elliot's childhood friend, Vince, enters the picture with an announcement that threatens to destroy their idyll.

'Waiting for the End of the World' is a gentle and absorbing book that tells of an accident and a friendship, of beliefs and of love.  To do this Ray tells of a search, several in fact, for meaning, for purpose and for a place to call home in whatever form that takes.  Through its pages we find numerous discussions of religion, of relationships and families and of conflicts.

Elliot is a middle class everyman, a beige coloured personality forged through 18 years of blending into the background as a result of living with the secret.  He's a likeable sort of chap if maybe a little devious although an early scene of him and Lana singing along to Kula Shaker did almost cost them any and all sympathy I had. It's the reappearance of Vince that's the catalyst for strangeness in Elliot's existence as he's introduced to the millenarian cult to which Vince belongs and their reluctant Messiah, Phillip, at which point things take a turn for the weird as the couple are forced to reckon with the secret and unpick the enigma behind Vince's unwelcome intrusion into their lives.

Driving down a similar road to Andrew Michael Hurley although of perhaps a more cosmic and less earthy bent it is, as I said, an absorbing read and one that I devoured over two afternoons.  I have to admit to finding some of the dialogue, particularly between younger Elliot and Vince a little clunky and I would have liked more to have been made of the stranger elements but these are small quibbles amongst the enjoyment I took from reading this rather lovely book.

Affiliate links are provided for your convenience and to help mitigate running costs.
Posted by ian holloway at 15:31

Email ThisBlogThis!Share to TwitterShare to FacebookShare to Pinterest
Labels: book review, PS Publishing, R.B. Russell, Waiting for the End of the World