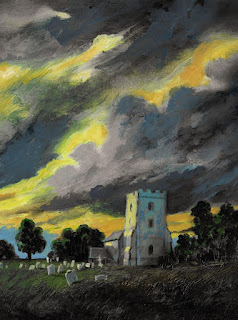 John Howard & Mark Valentine
Sarob PressCharles Walter Stansby Williams (1886-1945) wrote seven mystical/supernatural novels between 1930 (War in Heaven) and 1945 (All Hallows’ Eve). He was also a poet and theological writer, and a member of The Inklings, the Oxford-based group of literary titans that included, amongst others, J.R.R. Tolkien and C.S. Lewis.

In this all new shared volume, John Howard and Mark Valentine pay affectionate tribute to Williams’ writings with a long novella, “The Dance of Gold” by John and two novelettes, “Kraken Tide” and “Seek for the Pomegranate” by Mark. Both authors have also provided illuminating afterwords to their stories.

I've had three of Charles Williams' novels on my shelves for a couple of years now but have yet to find the opportunity or the urge to dip into them so the ways in which John & Mark have reflected his work in this collection is to an extent a mystery to me.  What isn't beyond me though is just how good their stories are.

The collection consists of two prose pieces relating each authors experience of Williams' work, a novella from John and two short stories from Mark.  The prose pieces are interesting and illuminating but not what I came here for so onward ever onward.

John opens the book with 'The Dance of Gold' where a gold coin of rare historic and mythic provenance is found in the donations box of a remote parish church.  Soon mystery and intrigue begins to accumulate around the coin as it's presence and it's absence exerts a very real effect on those around it and the country at large.

I've been a fan of John's writing for a while now (since first reading him in another Sarob publication) and getting to read him in a longer form than is usually the case was a real treat.  The story he weaves is one of delicate poise, a metaphysical thriller wherein the mythic past holds the fate of the country in the balance through the intermediaries of a small rural village.

Mark's two stories proved to be a real surprise as both proved to be far more playful than I've come to expect.  'The Kraken Tide' reads like a John Wyndham romp through a flooded Lincolnshire before taking a sudden shift into Lovecraft or Wheatley territory.  It would have made for a great Hammer movie and was fantastic fun to read.

The second story proved equally so with the introduction of two, or perhaps more accurately three, characters that I really hope Mark returns to for further adventures; the mildly eccentric and magnificently dry Rachel Verulay, her introverted almost paramour Thomas Mulberry or 'Marmoset' as she soon christens him and not forgetting Lepus the straw hare.

With shades of Agatha Christie and Michael Arlen it's an absolute joy that had me chuckling aloud on several occasions before the story is wrapped up far too soon in a mythic finale.

With two of my favourite modern writers of the supernatural I knew I was going to be in for an enjoyable ride here but what I got far surpassed all my hopes.

Affiliate links are provided for your convenience and to help mitigate running costs.
Posted by ian holloway at 18:00