Cashing in on the success of Amicus Productions' portmanteau horrors World Film Services' 'Tales That Witness Madness' follows the time worn tradition of four short tales within a linking story which in this case finds Donald Pleasence's Dr. Tremayne relating the stories of four of his patients to his colleague Dr. Nicholas played by Jack Hawkins in his final film role and who having had his larynx removed in 1966 due to throat cancer is dubbed here by Charles Gray.
The first story, 'Mr. Tiger', is a slight but amped up Calvin and Hobbes where young Paul's (Russell Lewis) meat eating imaginary friend takes a dislike to his bickering parents (Donald Houston & Georgia Brown).
'Penny Farthing' is a silly, nonsensical and really rather pointless tale of antique dealer Timothy (Peter McEnery) who is repeatedly compelled by a photograph of Uncle Albert (Frank Forsyth) to ride his penny farthing back in time to meet Albert's sweetheart (Suzy Kendell).
In 'Mel' Brian Thompson (Michael Jayston - Doctor Who's the Valeyard) becomes besotted by a dead tree he brings home and displays in his living room much to the dismay (and doom) of his wife, Bella (Joan Collins). 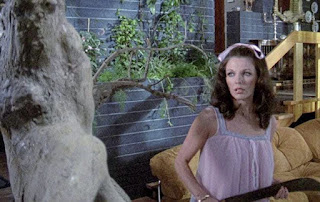 The final story, 'Luau' has Kim Novak as the magnificently named Auriol Pageant trying to impress her new client Kimo (Michael Petrovich) by throwing a party but he and his assistant Keoki (Leon Lissek) have a recipe plans for her precocious young daughter Ginny (Mary Tamm -  Doctor Who's Romana I).  It's tale of magic and cannibalism far and away the most brutal of the stories here that throws aside the more farcical nature of the previous three for a particularly bleak conclusion.
Director, Hammer and Amicus legend, Freddie Francis weaves his customary magic in a setting that reminds of Amicus' 'Asylum' (UK

) from the previous year. The whole thing is massively daft but played entirely straight faced by all involved in what is a fun and perhaps underappreciated contribution to the portmanteau subgenre.
Buy it here - UK

If you enjoy what we do here on Wyrd Britain and would like to help us continue then we would very much welcome a donation towards keeping the blog going - paypal.me/wyrdbritain
Affiliate links are provided for your convenience and to help mitigate running costs.
Posted by ian holloway at 10:51