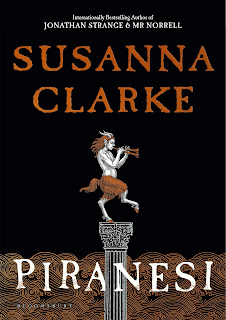 Susanna Clarke
BloomsburyPiranesi's house is no ordinary building: its rooms are infinite, its corridors endless, its walls are lined with thousands upon thousands of statues, each one different from all the others. Within the labyrinth of halls an ocean is imprisoned; waves thunder up staircases, rooms are flooded in an instant. But Piranesi is not afraid; he understands the tides as he understands the pattern of the labyrinth itself. He lives to explore the house.

I think in many ways it must have been pretty intimidating to have been Susanna Clarke after the release of 'Jonathan Strange & Mr. Norrell'.  Here was your debut novel, your labour of love finally out in the world and people were loving it.  It's an odd sort of novel to receive such universal acclaim; a fantasy about magic, and other worlds and the maliciousness of faeries.  Neil Gaiman loves it and he's even going to write the blurb for it.  It's a success and then it's a huge, boundary crossing success that the types of people who sneer at 'genre' are allowing into the halls of 'proper literature'. It must have been shockingly intimidating and with the addition of a persistent health problem shockingly frustrating too.  So much so that aside from a collection of short stories from the world of 'JS&MN', 'Ladies of Grace Adieu, it's been 16 years since we last heard from her.

'Piranesi' - named for the 18th century Italian engraver Giovanni Battista Piranesi who made beautifully evocative etchings of Rome and of ornate and improbable prisons - lives in The House.  The House is his whole world and, quite possibly, is indeed the whole world.  The House has many rooms each full of statues.  There are clouds on the upper floors through which birds soar and entire oceans full of fish on the lower floors.  Only one other person lives in The House, The Other, but there are the bones of 13 previous inhabitants which Piranesi tends to and talks to. The House is kind, The House is beautiful, and The House provides.

Into The House and into Piranesi's life of exploration comes a 16th person and with their arrival comes some startling revelations.

Written as a series of journal entries the novel is a light and gentle exploration of one man's love of his home.  Piranesi is the tale of a Robinson Crusoe who has found Utopia on his island.  It's a story of a man who is both lost and found.

This is an entirely new book from what Clarke did before.  In style and setting it is entirely different and that's a wonderful thing.  'Piranesi' is a delicate marvel.  It isn't convoluted or tricksy because Piranesi the man isn't, it's warm and open and beautiful because Piranesi the man is.  It's a book that channels the outer limits of some of the fantastical wonders that have preceded it but feels entirely contemporary particularly in the world of 2020 where the rooms of our houses have become our worlds.

Affiliate links are provided for your convenience and to help mitigate running costs.
Posted by ian holloway at 21:39